Jamie Ritchie, Sean Maitland and Cameron Redpath drop out of the team that beat England 11-6 at Twickenham.

In come, back-row Blade Thomson, centre James Lang and winger Darcy Graham as Scotland aim for back-to-back wins over the Welsh for the first time since 2003.

Wales opened with a 21-16 win over Ireland in Cardiff last weekend.

Head coach Gregor Townsend said Ritchie and Maitland are expected to be fit for the round three visit to France on 28 February.

Redpath, who made such an impressive debut against England, has a neck problem that will keep him sidelined for the “next few weeks” but it is hoped the 21-year-old can recover before the end of the championship.

In October, Townsend’s side completed last year’s delayed tournament with a 14-10 success in Llanelli, while Wales were 18-11 winners in Edinburgh in 2019 on their way to a Grand Slam triumph.

Having tasted victory at Twickenham for the first time since 1983, Scotland are chasing a fifth consecutive Six Nations win.

“It was a very encouraging performance at Twickenham and the squad performed to a level which has to be the benchmark throughout the tournament,” said Townsend.

“Wales are also coming into this game after a win and will have the same objective, so it will be a tough challenge as always.

“Both teams were involved in physical contests last weekend, and that is evidenced by the injuries Wales and we ourselves have picked up. For us, we are able to bring in three quality players in Blade, James and Darcy. They have been training well and are highly motivated to make the most of this opportunity.”

Thomson, Lang and Graham were not included in the Calcutta Cup-winning matchday squad, with the bench personnel remaining the same.

The incoming trio all started in October’s win in Llanelli. 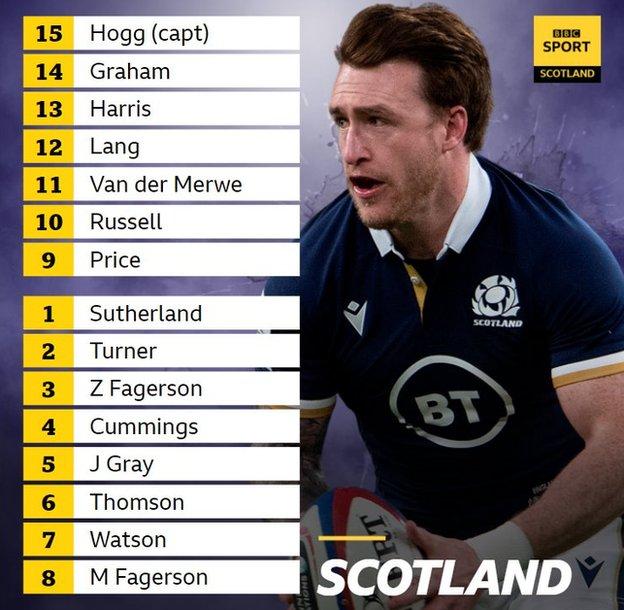 The Met Office has issued an amber warning for thunderstorms.
Read more

Instagram is the hottest social media platform of all times. However, there are only a few basic steps you need to follow to get...
Read more

He follows Andrew Neil out of the door after previously working at the BBC for 17 years.The veteran broadcaster, 60, announced his move to...
Read more

A London vicar says he was "called by God" to create the virtual 'Church of Chat'.When lockdown forced church doors to close, Rev Simon...
Read more

Most front pages focus on potential tougher Covid restrictions by Christmas, amid a surge in cases.
Read more

The government says it will instead look at how to use existing law and "non-legislative measures".Image source, Getty ImagesPlans to ban so-called conversion therapy...
Read more
Science

The Fast-Paced World of KhalidKhalid is a young man that's currently being raised by his single mother while she was away in Canada....
Read more

Priyank Chopra Book Review - How To Be Happy by Priyank ChopraWhen you think of a Doctor of the Healing Arts, what first...
Read more
Business

Tetyana Nesterchuk is safe in London while her sister Mariia has chosen to stay in war-torn Ukraine.
Read more
Business

Mo Farah is beaten by Ellis Cross in his first race since June while Eilish McColgan misses a British record by two seconds at...
Read more

Man arrested after Australian child found dead in barrelon January 19, 2022 at 12:34 am

A man has been charged with murder after a five-day search for a girl near Sydney, police say.Image source, Getty ImagesA man has been...
Read more
Business

Australia come back from the brink to beat Men's T20 World Cup favourites Pakistan by five wickets in another absorbing semi-final in Dubai.
Read more
Business