Buying this dip could get ‘very, very nasty’ for investors, trader warns

Buying the dip could sting.

So said BK Asset Management’s Boris Schlossberg as U.S. stocks attempted but failed on Wednesday to claw their way back from a nearly 2,000-point decline earlier in the week.

“We have been conditioned as investors for the last 10 years to buy the dip continuously,” Schlossberg said on CNBC’s “Trading Nation.”

“If this is the year that breaks that behavior, that’s going to be very, very nasty for most investors,” he warned. “If you have a couple of failed buy-the-dip situations going forward this year, it’s going to really create a very sour sentiment and you’re going to have much steeper declines than people believe. So, to me, we’re really at a very key cusp here in the markets.”

The Dow Jones Industrial Average and S&P 500 have fallen sharply year to date, with the majority of the declines coming within the last month or so as fears around the spread of the coronavirus spiked worldwide. The Dow had lost more than 5.5% for 2020 as of Wednesday’s close, while the S&P was down more than 3.5%. Thursday’s futures prices were down.

Market commentators have been split about how to play the decline, with some suggesting steering clear of stocks for now and others saying it’s not a bad time to buy selectively.

“From a long-term point of view for this year, going forward, it’s going to make a lot of sense if you’re going to make a spread trade to get long the Dow, short Nasdaq, and that’s simply because we’ve had 10 years of Nasdaq outperformance,” Schlossberg said. 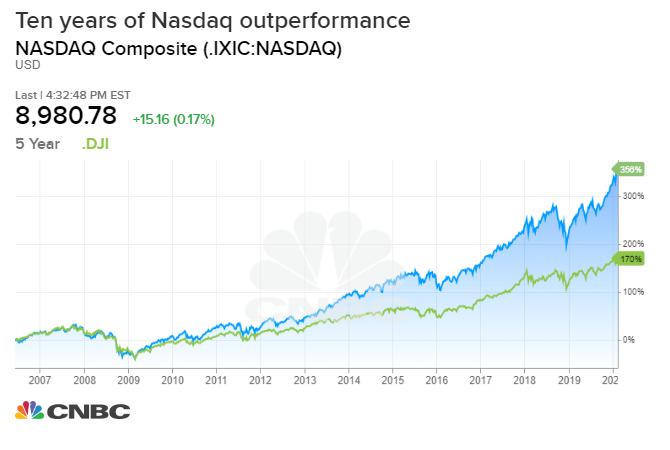 Craig Johnson, senior technical research analyst at Piper Sandler, agreed with Schlossberg that stocks could endure some more downside before resuming what he maintained was an intact “secular bull market.”

“We’ve gone down and broken through the 200-day moving average [on the S&P 500], and it looks like … at minimum, we’re going to have to go back and retest that 200-day moving average,” Johnson said in the same “Trading Nation” interview. “The market internals have gotten weaker, and we continue to see some of our proprietary market timing gauges flip into sell positions, so this can be a little bit more downside that’s going to have to get played out.” 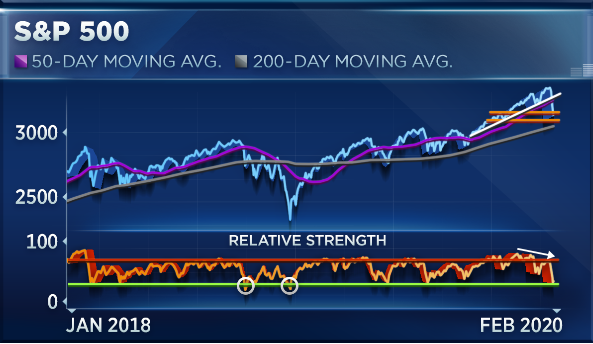 The same goes for the Nasdaq, Johnson said, which could bode well for Schlossberg’s recommended trade.

“You’re probably going to see more downside, at least in the short to intermediate term here, with tech,” Johnson said, adding that right now, the market is pricing in an eventual recovery from this sharp drop.

One lingering issue to watch is the strength of the dollar, both traders said.

“The strength of the dollar right now probably is actually not a positive thing from lots of different perspectives because it creates a huge amount of credit tightening across the world,” Schlossberg said. “It kind of puts salt on the wound [of] emerging markets and all the other economies in the world that had to finance their debts in dollars. So, to me, the strengthening of the dollar actually compounds the problem rather than makes it better as we stand now.”

Johnson agreed that the dollar could “be a major headwind” if it stays strong and Wall Street’s risk-off trade rolls on.

“The DXY chart is still continuing to trend higher here and, from my perspective, the next real big resistance level is closer to, like, 115, 120,” he said. “The trend is up. That’s not changing right now.”

England's women's side warm up for this year's World Cup with a 60-0 thrashing of Wales, who were competing in their first international Test.England...
Read more

Fireside Chat With Sean Ferres On How To Land Clients

Sean Ferres is an interesting client generating mentor as he advocates for all parts of individual and expert advancement to assemble the brand. Other...
Read more

Britons in Ukraine are weighing up whether they can escape as fears of a Russian invasion mount.Image source, Ben GarrattBritish and other foreign nationals...
Read more

How to Look Great in Business Casual

So often when you have to go into business casual you think the clothing is too loose or things just don't fit properly. While...
Read more

Under threat of Russian bombs, Lviv hides away its priceless heritageon March 12, 2022 at 12:25 am

The picturesque western city of Lviv is racing to protect is cultural and religious artefacts.
Read more
Business

Mark Frerichs: US hostage swapped for Afghan leader linked to Talibanon September 19, 2022 at 11:03 am

The British-Iranian's five-year sentence ended on Sunday, but she faces a separate court case.image copyrightReutersBoris Johnson has demanded the "immediate release" of Nazanin Zaghari-Ratcliffe,...
Read more

Thousands pay their respects as the late monarch's coffin makes a six-hour journey from Balmoral.This video can not be playedTo play this video you...
Read more
Business

Coaches now have powerful tools which can find patterns in play that humans would struggle to see.
Read more