The Papers: ‘Ambulance unlikely if you fall’ and ‘Mone alone’on...

Health officials advise warming living rooms in the day and bedrooms at night during the cold spell.This video can not be playedTo play this...
Read more

The Beijing Games closed on Sunday, with IOC president Thomas Bach calling for political leaders to be inspired by the athletes’ “examples of peace”.

Almost 3,000 athletes competed in 109 events across 15 disciplines during the past two weeks.

International Olympic Committee president Thomas Bach called for political leaders “around the world” to be inspired by the athletes’ “example of solidarity and peace”.

“This unifying power of the Olympic Games is stronger than the forces that want to divide us,” he said.

Bach said the athletes had “given peace a chance,” with his comments coming amid rising tensions between Russia and Ukraine.

“Each and every one of you strived to achieve your personal best. We were deeply touched how you were wishing and cheering for your competitors to achieve their best as well,” he said.

“You not only respected each other: you embraced each other, even if your countries are divided by conflict.”

Bach also encouraged countries to continue vaccinating against Covid-19, saying: “If we want to finally overcome this pandemic, we must be faster.

“We must aim higher, we must be stronger, we must stand together. Vaccination means caring for each other.

“In this Olympic spirit of solidarity, we call on the international community: give equal access to vaccines for everybody around the world.”

Great Britain leave Beijing with two medals – gold in the women’s curling and silver in the men’s event.

Curling skip Bruce Mouat, who led the men’s rink, was the flagbearer for Team GB at the closing ceremony.

The Olympic flame was extinguished, with the next Games taking place in Milan-Cortina in Italy in 2026. The Winter Paralympics begins in Beijing on 4 March. 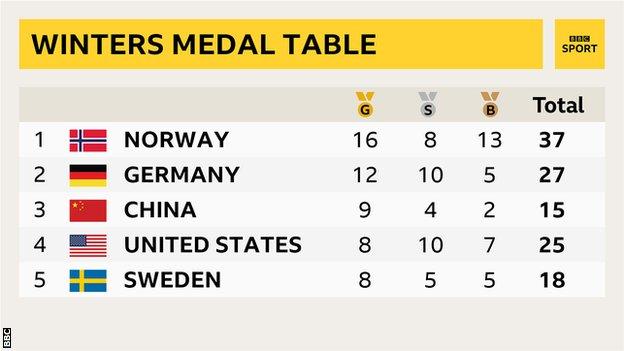 The Beijing Games were engulfed by the controversy surrounding Russian figure skater Kamila Valieva and the teenager’s failed drug test.

The positive test came to light after the Russian Olympic Committee won gold in the team figure skating, with the 15-year-old becoming the first woman to land a quadruple jump at an Olympic Games.

However, the medal ceremony was delayed, with it coming to light that Valieva had tested positive for a banned drug used to prevent angina attacks.

After a series of appeals and re-appeals, Valieva was allowed to compete in the remaining individual events, but it has led to questions about her coaching team and the fairness of children competing in Olympic events, particularly as she crumbled in her final event.

None of the podium athletes from the event have received their medals, with the IOC asking the World Anti-Doping Agency (Wada) to investigate the positive result.

“Every athlete wants a fair playing field and we also want to protect the health and mental health of athletes,” two-time Olympic champion Lizzy Yarnold said on BBC TV.

“The biggest thing I have learned is remembering athletes are humans. We need to protect our young athletes.”

There have been moments of brightness. Norway will leave Beijing with a record 16 gold medals and 37 in total, having dominated in the snow.

China’s 18-year-old Eileen Gu became one of the stars of the Games with gold in the big air and halfpipe, while snowboarder Shaun White closed his career on the slopes.

The biggest sporting surprise was America’s Mikaela Shiffrin, a heavy pre-Games favourite to clean up in the skiing events. She crashed out of three of her best events and did not manage to grab a medal in the others.

While the Games have been a success for China, who secured their best Winter Olympics medal haul, questions over human rights abuses and the safety of tennis player Peng Shuai that dominated the build-up to the competition remain.

This is Great Britain’s lowest medal total since 2010, where they won a sole gold in the women’s skeleton.

UK Sport set a target of three to seven medals but there were a number of near-misses and disappointment in the sliding events, making it the first time since 2002 that Britain have failed to win a skeleton medal.

Snowboarder Charlotte Bankes, 2018 skeleton bronze medallist Laura Deas and alpine skier Dave Ryding were among the medal hopes, but struggled for rhythm and form in Beijing.

Britain’s first medal of the Games came on Saturday in the men’s curling, before Eve Muirhead’s rink claimed gold on the final day.

Sally Munday, the chief executive of UK Sport, said the “greatest progress can come if we really learn from disappointment”.

“I also know that whilst the last 24 hours has created real joy, there are a number of our athletes who will leave Beijing disappointed,” Munday wrote.

“Whilst there have been some memorable performances, many did not achieve the results they came for and no-one will be more disappointed than the athletes themselves.

“We always knew that Beijing 2022 would be a challenge like nothing they had previously experienced.

“We also know that the jeopardy that makes sports on snow and ice such a compelling spectacle for those of us watching is also a recipe for uncertainty. This undeniably played its part in preventing some of our medal hopes from achieving their dreams.”

Johnson out of world title fight in New York because of Covidon January 6, 2022 at 7:25 pm

Callum Johnson has been forced to withdraw from his world title fight against WBO champion Joe Smith Jr next weekend in New York.
Read more

For Thursday, we’ve got earnings news ahead from Apple, Amazon and Gilead, the latter of which has been fueling optimism with its own COVID-19 treatment. After that...
Read more

Omicron is the 13th variant of the Covid-19 virus to receive a Greek name but the pronunciation is up for debate.
Read more
Science

Covid: Boosters perform well in trial and Ed and Elton’s cheer after painful yearon December 3, 2021 at 7:43 am

Visit Cornwall is only asking people who have booked ahead to visit following a rise in Covid cases.Tourists are being asked to stay away...
Read more
Business

About 20,000 households had a fourth night without power and say getting information is difficult.Image source, Northern PowergridA power company has been accused of...
Read more
Business

Covid: Boris Johnson urged to share vaccines with poorer nationson March 28, 2021 at 1:30 am

A group of charities is calling on Boris Johnson to begin donating vaccines through the Covax scheme.Sage scientist Sir Jeremy Farrar, director of the...
Read more

Four-year-old Liza was one of three children killed in the attack on Vinnytsia, far from the front line.Image source, LOGOCLUB CHILDREN'S CENTERResidents of Vinnytsia...
Read more
Business