The Art of Perseverance: Kirstie’s Journey

Entrepreneurship is the great equalizer. Regardless of your background, opportunity, education, and a myriad of other social factors, if you can find a way...
Read more
Science

Ben Stranahan: The Rise of a Producer

Ben Stranahan has had a career in Hollywood for ten-plus years now. He has had a number of roles such as actor, producer, and...
Read more
Business

Thomas Hutteau Works with Two of the Hottest Artists,...

Thomas Hutteau is a camera operator that specializes in Steadicam. “I am responsible for the technical setup of the Steadicam system and for balancing...
Read more
Science

Ryan Stream, an award winning professional speaker, musician, and two time war veteran has been able to combat his traumatic and troublesome past with...
Read more

Team GB also made history in the pool, clinching the men’s 4x100m medley relay silver for their eighth swimming medal of the Games.

Duncan Scott was part of a quartet including Adam Peaty, Luke Greenbank and James Guy who were pipped to the title by the USA.

The 24-year-old, who signs off with a gold and three silvers, has now won more medals at a single Olympics than any other British competitor.

In a dramatic BMX final, Worthington fell on her first run but landed a ground-breaking 360-degree backflip on her second to score 97.50. 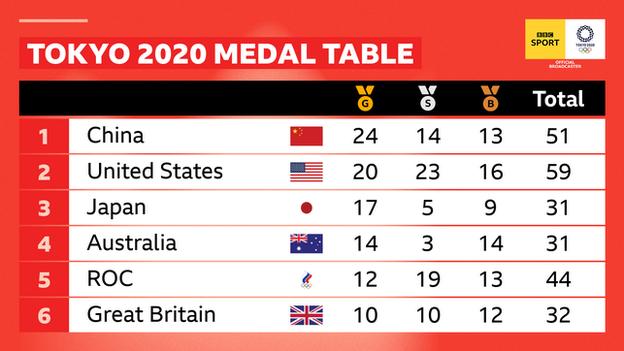 Pat McCormack will also fight for gold in the men’s welterweight division after Ireland’s Aidan Walsh pulled out of their semi-final with an ankle injury, while Frazer Clarke reached the super-heavyweight final after France’s Mourad Aliev was disqualified.

GB’s sailing team have guaranteed two more medals to add to the bronze they have already won.

John Gimson and Anna Burnet are second overall in the mixed Nacra 17 class with one race to go, while defending champion Giles Scott leads the men’s Finn class and cannot now drop lower than third. 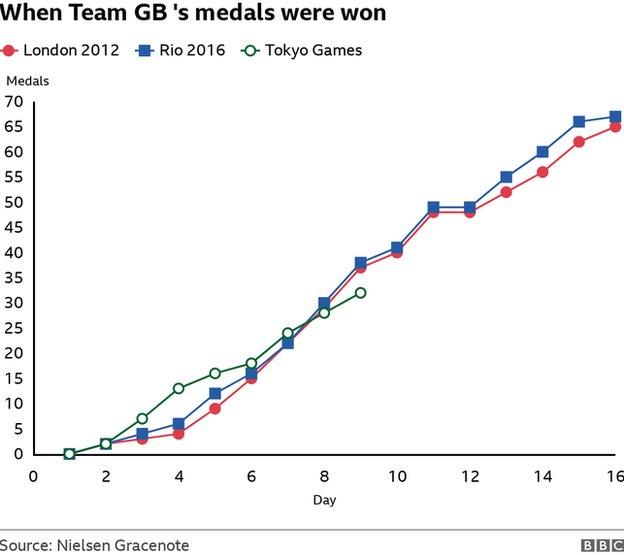 Showing the confidence that makes him the world’s best, Whitlock went out first and delivered a near-perfect routine that earned him a score of 15.583.

It was then a nervous wait for the the 28-year-old, but he had done enough to deliver his third career Olympic gold and second in the pommel horse.

That, alongside two World Championship titles, makes him the all-time most successful gymnast in the event.

He also becomes the seventh British competitor to win at least six Olympic medals, after Scott also achieved the feat in the pool earlier on Sunday.

They pull level with Steve Redgrave and Charlotte Dujardin, while only Bradley Wiggins (eight) and Chris Hoy and Jason Kenny (both seven) have more.

“I feel absolutely lost for words, I can’t even describe the feeling and I feel completely overwhelmed – it feels surreal,” said Whitlock.

“Team GB have been doing absolutely incredibly. The gold medals have been flowing in and I just wanted to do the same thing.

“To come out here and get my own, I feel very proud.”

Worthington said she was trying to find a “big banger trick” to deliver Olympic gold but an unprecedented 360-degree backflip left her on the floor during run one.

Undeterred, the 25-year-old went on to execute the move in her second run, becoming the first woman to land it in competition, and registering a score of 97.50.

“It was incredible,” said Worthington, who watched on as four rivals – including hotly tipped American Hannah Roberts – failed to usurp her mark.

“I’ve not been doing that trick for so long but we’ve been trying to find that big banger trick and when we did we thought, ‘this is the one’. If it wasn’t for Hannah Roberts, we wouldn’t be doing these tricks or be this far.”

It was the culmination of years of hard work for Worthington, who was a late convert to BMX and had been working as a chef “sweating it out in the kitchen for over 40 hours a week” before concentrating on the sport.

“It’s a lot of hard work paid off. On the bike, yes, it’s physical hard work but I feel like the work on myself has paid off,” she added.

Having watched that drama unfold, Brooks added Britain’s fourth BMX medal – after Bethany Shriever and Kye Whyte in the racing – to cap an incredible Games.

“I’ve just cried for the last couple of minutes,” 25-year-old Brooks told BBC Sport after his bronze was confirmed.

Regular visits to the podium at the Tokyo Aquatics Centre this Games have seen Britain establish themselves as one of swimming’s powerhouses in Japan.

They may still be a distant third on the medal table to the USA and Australia, but an eighth trip to the podium marks the nation’s most successful Olympics in the sport.

But a silver medal rounded off a superb Games in the pool for Britain, who finish with four swimming golds, three silvers and a bronze – having earned a solitary gold at Rio five years ago.

It also capped a record-breaking Olympics for Scott, whose four medals are record haul for a Briton at a single Games and take him to six overall.

“I have a lot of good team-mates,” Scott told BBC Sport. “I’m very fortunate to be part of some excellent relay teams.”

The US victory means American superstar Caeleb Dressel joins compatriots Michael Phelps, Mark Spitz and Matt Biondi, as well as East Germany’s Kristin Otto, as the only swimmers to win five golds at a single Olympics.

There was no shortage of drama at the Olympic Stadium on a night to remember for Italy.

After an exhausting two-hour competition, the pair couldn’t be split, having recorded best clearances of 2.37m. They were offered an opportunity to take part in a jump-off, but in a moment of sportsmanship, they agreed to share the title.

Soon after, Lamont Marcell Jacobs claimed a shock gold in the 100m final to make it two Olympic athletics titles in quick succession for Italy.

Jacobs, who only switched away from long jump in 2018, streaked clear to win in 9.80 seconds, 0.04 clear of American Fred Kerley with Canada’s Andre de Grasse taking bronze.

Earlier, Venezuela’s Yulimar Rojas smashed the women’s triple jump world record, which had stood since August 1995 – two months before she was born.

With her final jump, and with gold already secured, she leapt 15.67m to smash the previous best by 17cm.

“I’m lost for words, I can’t describe this feeling and this moment,” said the 25-year-old. “Gold medal winner, with an Olympic record, and a world record – wow. It is a fantastic night.”

Britain’s eventers are well placed for team and individual success after impressive cross-country displays, with world number one Oliver Townend, Laura Collett and Tom McEwen leading the team event ahead of Australia and France.

One round of showjumping at 09:45 BST on Monday will decide team medals, followed by the leading individual contenders jumping again at 12:45.

In the men’s tennis, Alexander Zverev won gold to become the first German player to win an Olympic title in the singles since Steffi Graf in 1988.

He defeated Karen Khachanov of the Russian Olympic Committee 6-3 6-1.

But it was heartbreak for Britain’s men’s hockey players, as they lost 3-1 to India in the quarter-finals.

Murray and Salisbury through in doubles in Tokyo but Watson goes outon July 24, 2021 at 9:20 am

Andy Murray and Joe Salisbury go through in the men's doubles but Heather Watson loses in the first round of the women's singles.
Read more

Brazil's right-wing president is trying to rally support ahead of next year's election.image sourceAFPBrazilian President Jair Bolsonaro has said he sees three alternatives for...
Read more

Learn More About Super Bowl 2020The Super Bowl is the most watched sports event of the year and that does not come out...
Read more

While most businesses across the United States remained shuttered due to the coronavirus pandemic, Terry Sawyer, co-founder of Hog Island Oyster Co had plenty...
Read more
Science

Does Jeff Bezos Own Amazon?

Some have questioned the wisdom of Jeff Bezos purchasing Amazon and wondered if he will be an owner instead of a director. Is this...
Read more

Covid-19: Business confidence rising and cases doubling every week in Scotlandon August 31, 2021 at 6:38 am

The hottest shows of 2020 might be influenced by the popular shows of last year but also, some new shows will rise to the...
Read more
Business