Teachers prepare to strike in England and Waleson January 31,...

Former Wales captain and BBC Sport columnist Ashley Williams says watching his team as a fan and pundit was just as tough as being on the pitch.

I didn’t think I would be as bad but when the Swiss shots were coming in and they were getting corner after corner, I was on my feet in the BBC studio shouting at the TV and trying to head the ball out for the boys.

The worst moment was probably when Switzerland substitute Mario Gavranovic scored their late goal which was – eventually – ruled out for offside.

Gavranovic looked offside all day when I saw it the first time around but then you start to worry because it took so long for VAR to rule it out.

I started thinking they were going to give it, and I couldn’t believe it. Fortunately, when the decision was made, it was as obviously offside as it had first appeared.

We ended up with a point and I am very happy with that – I would have taken it before the game because Switzerland are a very good side.

Wales can play much better than that, of course, but let’s not forget we went 1-0 down and we didn’t crumble. We worked our way back into the game and now we are up and running in this tournament. It is safe to say I am finding it harder watching Wales in this European Championship than I did when I was playing in the last one.

‘We are used to pressure, but we need to carry more of a threat’

I am sure I wasn’t the only Wales fan who had a stressful time on Sunday but I have played in plenty of games like that for my country, and I am used to us not controlling the game in terms of possession.

I am always absolutely comfortable with Wales having less of the ball than the opposition. It’s been that way for years in qualifying, and it’s fine.

What was missing in Baku, though, was the threat that we normally carry at the same time.

In my time playing for Wales, we were used to soaking up that kind of pressure and feeling comfortable. We’d almost be saying ‘keep coming at us, keep coming’ and then – bang – Gareth Bale, Aaron Ramsey or Daniel James would do something to get us a goal.

We worked very hard defensively against Switzerland of course, and all credit to the boys for that.

But we just didn’t do enough the other way. We didn’t really secure the first pass or first touch when we got possession back and didn’t give Kieffer Moore enough quality balls for him to hold up and move us up the pitch.

All of that allowed Switzerland to build momentum and it was only when Xherdan Shaqiri went off with around 25 minutes to go that we started to get on the ball and express ourselves the way we can.

That has to improve against Turkey on Wednesday, which again is in Baku, and I am confident it will.

Let’s keep the ball higher up the pitch, and take the game to them. We’ve got the players to do that, and apply some pressure of our own.

‘Why we let Embolo grow into the game’

There are a few other things for Wales boss Rob Page and his coaching staff to think about tactically before that Turkey game.

Our organisation when we were defending corners did not look right at all, which was especially a problem because we conceded 12 of them.

And, in open play, we were solid at the back at first but, as the game went on, we got more and more stretched.

Our holding midfielders, Joe Allen and Joe Morrell, always had a decision to make – whether to press Switzerland’s deeper-lying midfielders, or keep tabs on Shaqiri who was playing as a number 10 and kept popping up behind them.

In the first half, Allen and Morrell sat deeper, which worked a lot better.

After half-time, they pressed forward more and left a gap between midfield and defence, and that was where things began to go wrong for us.

It left our centre-halves a little bit more isolated and allowed Breel Embolo to grow into the game and cause us more problems.

Again, we can’t afford to let that happen against Turkey. If we keep giving teams possession in dangerous areas, they will punish us.

‘Moore can cause Turkey more problems’

Another factor to think about is the heat in Azerbaijan. We put one heck of a shift in against the Swiss, and we only get three days to recover.

Whoever comes in, though, I think Kieffer Moore is a cert to keep his place in our attack.

For me, he has to be one of the first names on the teamsheet. We all called for him to come back into the side for Sunday’s game, and he showed why.

The danger of playing Kieffer is that we try to hit him on every occasion, which is not a good idea. You do need to get the balance right but if you give him the right service, he is so effective. 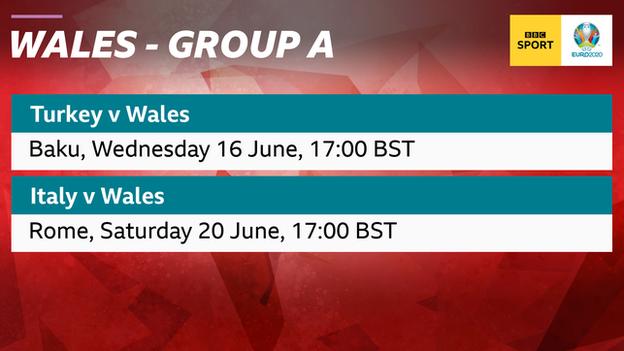 I like him because he is old-school – he puts himself about. He might get fouled but he is happy giving fouls away too, and he just loves causing problems for centre-halves. I played against him when I was at Bristol City and he was an absolute nightmare to deal with.

But he is a much better footballer than he gets credit for too – because he is fast, mobile and good with the ball at his feet.

Kieffer is clever as well, as he showed with his goal against the Swiss. He never just stays static and waits for people to find him.

He didn’t make the biggest move to get on the end of Morrell’s cross, but it was just enough to make some space and get to the ball first. He despatched his header really nicely too.

His journey to the Wales squad and this tournament has been an incredible one. He was working as a lifeguard in his early 20s and, five years ago, when we were at the Euros, he was playing for Forest Green in the National League.

Now he is an integral part of this team and he is going to cause more top international teams a lot of problems, starting with Turkey on Wednesday.

Do you know what it takes to be successful in business casual? If you aren't, then you should take the time to look at...
Read more

Beyoncé picks up her 26th Grammy, while Billie Eilish wins a prize for her Bond theme.image copyrightGetty ImagesBeyoncé has picked up her 25th and...
Read more

The army says it has caught Palestinians suspected of a deadly attack in the occupied West Bank.Image source, ReutersIsrael has announced the capture of...
Read more

Shamima Begum trafficked by IS to Syria for sexual exploitation, court hearson November 21, 2022 at 12:42 pm

Her UK citizenship was unlawfully stripped, lawyers say, as a five-day appeal hearing begins.This video can not be playedTo play this video you need...
Read more

Along with three of his children, the ex-president is accused of lying to "unjustly enrich himself".This video can not be playedTo play this video...
Read more

BA and Heathrow say the move will help minimise disruption for passengers during the peak season.Image source, ReutersAirlines are expected to announce a series...
Read more
Business

Luis Diaz salvages a point for Liverpool against Tottenham to take the Reds top of the Premier League on goal difference.
Read more
Business

Tory MPs are holding their first round of voting on who they want to replace Boris Johnson in No 10.Image source, PA MediaTory MPs...
Read more
Business

With Euro 2022 just around the corner, ex-England defender Alex Scott looks at the rapid pace of change within the women's game.With Euro 2022...
Read more
Home of Science
Facebook
Instagram
LinkedIn