Teachers prepare to strike in England and Waleson January 31,...

After a packed domestic season, the players face a testing Euro 2020, but which countries will be feeling the strain the most?

Club sides have been forced to play three times a week on a regular basis and now national teams bidding to become European champions face the prospect of up to seven matches in 31 days.

But which countries will be feeling the strain of such a gruelling format, coming straight after a frantic and brutal 2020-21 season? We have looked at a few stats to try to find out.

‘A risk to players’ health’

The warning could not have been clearer.

“The intensive match calendar not only risks players’ health, but also risks undermining their performance at the European Championship and 2022 World Cup,” said global players’ union Fifpro in November.

“Footballers are already experiencing fatigue due to the ongoing competition cycle, back-to-back matches and a lack of adequate rest and recovery during the summer – this is putting them at an elevated risk of stress and injury.”

The coronavirus pandemic delayed the end of the 2019-20 season, and caused the 2020-21 campaign to be compressed – but, with the number of fixtures more or less unchanged, completing the season became an endurance race.

Such physical demands have undoubtedly played a part in causing a long list of players to miss this summer’s showpiece.

England’s Trent Alexander-Arnold is out after picking up a thigh injury during Wednesday’s warm-up game against Austria, while his international team-mates Jordan Henderson and Harry Maguire are doubts.

Those injury worries come at the end of a season in which Premier League teams have been kept busy, with 10 of the England squad featuring for their club on at least 46 occasions in 2020-21.

Both Manchester clubs played more than 60 times, with United having to play four matches in an eight-day spell in May, including one tie in Italy, while Chelsea were involved in 59 games, with Arsenal and Tottenham one behind.

No player in any of Europe’s five biggest leagues – the Premier League, La Liga, Serie A, the Bundesliga and Ligue 1 – played in more club matches during the season just finished than Manchester United midfielder Bruno Fernandes.

Of United’s 61 games, he featured in 58 of them – as well as playing eight times for Portugal – but in January he dismissed any notion of being fatigued.

So, if the age of players could be used as a simplistic gauge of fitness, then it is good news for England and Wales as they have the second and third-youngest squads respectively. 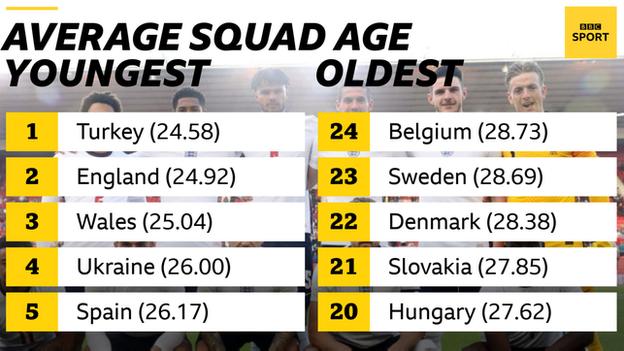 Wales have eight players aged 22 or under, as did England until Alexander-Arnold’s injury ruled him out, with Gareth Southgate not set to confirm a replacement until Sunday.

Turkey have the youngest squad at an average of 24.58 years per player, while Belgium, ranked number one in the world, have the oldest at 28.73. With 10 players aged 30 or over, this summer’s championship could be the last chance for their golden generation to win a trophy.

Sweden’s squad would have been the oldest if 39-year-old striker Ibrahimovic had not been injured, meaning Portugal defender Pepe, 38, is the oldest player at the tournament.

Poland defender Kacper Kozlowski is the youngest and one of two 17-year-olds selected, with England’s Jude Bellingham the other.

Scotland have the ninth-youngest squad at 26.96, although they only have one outfield player in their 30s, with their average numbers skewed by the inclusion of goalkeepers David Marshall (36), Craig Gordon (38) and Jon McLaughlin (33).

One aspect in England’s favour is the format itself.

The Euros are being played across 11 cities, yet Gareth Southgate’s side could play six out of a maximum seven games at Wembley.

If they top their group and keep progressing, the furthest they will venture will be a Rome quarter-final, before returning to London.

Wales would love such a schedule. They are heading east, further east than Iraq, Syria and most of Saudi Arabia, to Azerbaijan for two matches, before taking on Italy in Rome. If they progress as runners-up then it could be a return to Baku in the last eight.

Switzerland face a similar energy-sapping haul of Baku-Rome-Baku and then potentially either London or Amsterdam.

Belgium will also be dreading long flights as they have two away matches to start off the tournament – versus Russia in St Petersburg and against Denmark in Copenhagen, before a return to Russia.

Topping Group B would mean Roberto Martinez’s side would travel from north-west Russia to south-west Spain, a flight of more than five hours to get to Seville for their last-16 tie.

Manchester City and Belgium midfielder Kevin de Bruyne is one of those who does not see it as a fair tournament and in November criticised the draw process, where their opponents were known before it was staged.

“It’s a scandal, it feels like a fake competition,” said De Bruyne, himself facing a race to be fit after suffering a broken nose and damaged eye socket during the Champions League final on 29 May.

“This feels like competition distortion. Football is not really football any more – it’s becoming a business.”

Uefa has allowed each country to select 26 players, instead of the usual 23 for major tournaments, although Spain only chose 24.

And each country may well need every one of them.

Covid-19 restrictions could well mean players missing matches, just as seven Scotland players had to sit out their recent 2-2 draw with the Netherlands following a positive test in the squad, while the long-term effects of catching coronavirus are also still not fully known.

Newcastle were one of the teams badly affected by a Covid outbreak in their squad – and in May, boss Steve Bruce said: “Everywhere I looked, people were shattered, tired, sick. We’ve all experienced times we hope never happen again.

“A lot of people are running on empty because it’s been non-stop, basically, for two years, especially the players. The players desperately need a break.”

But that break will not be coming any time soon.

The players’ bodies will continue to be pushed to the limit. The manager and squad who can cope best with the workload could well find themselves becoming European champions.

Passenger flights due to land at East Midlands Airport are diverted to other airports.Passengers due to arrive at an airport have been diverted after...
Read more

Putin asks Kyiv to reciprocate with its own ceasefire order - but Ukraine rejects the request.Image source, EPARussian President Vladimir Putin has ordered his...
Read more

Cameron Smith's departure to LIV Golf is a sickening blow to the PGA Tour and those seeking to preserve the sport's status quo.Cameron Smith's...
Read more

War in Ukraine: Russia accuses Ukraine of attacking oil depoton April 1, 2022 at 8:22 am

The ruling means she will not be able to come back to fight the decision to remove her British citizenship.image copyrightBBC NewsShamima Begum, who...
Read more
Business

Police say they are looking for a man "believed to be known to both women".Image source, GoogleA woman has died and another has been...
Read more
Business

Why Should You Use Netflix?

Netflix is definitely one of the leading Internet providers in the world. There are millions of people who use this service every day and...
Read more
Business

The arrest of Muslims for cheering Pakistan's cricket win sparks concerns about freedom of speech in India.
Read more
Business

Mustafa al-Kadhimi said he was unhurt in the attack on his house, said to be by an armed drone.Image source, Getty ImagesIraqi Prime Minister...
Read more
Home of Science
Facebook
Instagram
LinkedIn