There is no shortage of hype around France’s Antoine Dupont.

So far in France’s interrupted 2021 Six Nations schedule, the 24-year-old has lived up to every bit of it.

Les Bleus travel to Twickenham on Saturday and as usual their not-so-secret weapon has been one of the main topics of pre-match discussion.

Having taken the 2020 Six Nations by storm, becoming the first Frenchman to win player of the championship, Dupont is now widely accepted as one of the world’s best – even by his opponents.

Youngs says the Frenchman “has the world at his feet” and described him as the “heartbeat” of Fabien Galthie’s effervescent side.

“I think Antoine is that new generation of scrum-half that is changing the way nines play the game,” Youngs told BBC Sport.

“I think he’s a wonderful talent and I’ve enjoyed watching him. I haven’t enjoyed playing against him.” 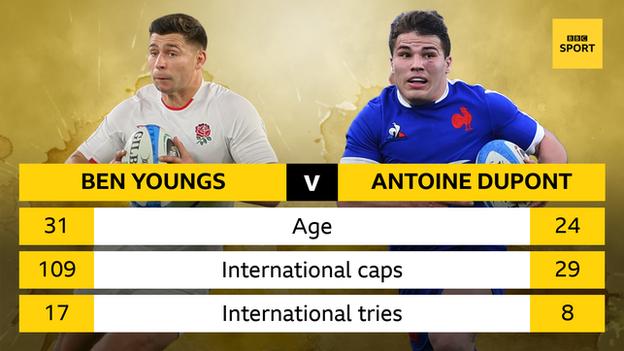 Dupont has become a well-known name across the rugby community over the last few years but his fame was established in the small village where he grew up.

The future international could be seen playing with a rugby ball outside the family hotel in Castelnau-Magnoac from the age of four.

Dupont played with local side Magnoac FC before making the step up to Auch – a club then in France’s second tier – in 2011.

Precocious throughout his career, he joined Top 14 side Castres and made his European debut against Leinster aged 17.

Three years later he won his first France cap when he came off the bench in a Six Nations game against Italy.

Dupont then joined Toulouse and established himself as France’s starting scrum-half during the 2019 Six Nations.

But it is perhaps those who saw his earliest steps on a rugby pitch that can best summarise what makes him so special.

“It was obvious to everyone that Antoine was at ease with the ball in his hands,” older brother Clement Dupont told the BBC in 2020.

“He is small but he is stocky. He has developed his strength and speed, which has allowed him to move quickly across the field.”

The mayor of Magnoac describes Dupont as “an exception”, adding that the village is “extremely proud” of him.

“The position of scrum-half has to be filled with your most prestigious players and Antoine Dupont is one of the best,” mayor Bernard Verdier said in 2020.

“It’s like a cork exploding out of a champagne bottle. He’s explosive. He’s an excellent player with a great personality.”

Whether described with champagne metaphors or not, why Dupont is so threatening is plain to see.

His quick-thinking from the base of the ruck and clever support lines have seen France bulldoze past Italy before claiming a first win in Dublin for a decade.

Despite playing two games compared to most other sides’ three, Dupont tops the Six Nations stats tables for try assists with four and is king of the offloads with four of those, too.

He produces quick ball and is backed up by a gloriously talented French backline.

At Twickenham, that line-up will be an even more daunting prospect than usual with centre Virimi Vakatawa returning to join Gael Fickou, Teddy Thomas and Damian Penaud.

Dupont has an instinct for the game that rarely sees him put a foot wrong. France’s defence coach Shaun Edwards describes him as “incredibly strong for a small guy” but is one of few people to pick a hole in Dupont’s game.

“If I can get his defence anywhere near his attack, he’s going to be some player,” Edwards told the Rugby Union Weekly podcast in February.

England’s coaches are not so optimistic, becoming the latest Six Nations side to stress the need to take time and space away from France’s petit general. If only anyone could work out how.

Youngs says he is looking forward to the challenge of facing Dupont, but points out the unfortunate downside that his opposite number “doesn’t do anything wrong”.

“His biggest attribute is his sharpness around the ruck,” Youngs continued.

“He is compact and extremely powerful through contact. He makes semi-opportunities into full-blown opportunities.

“We’re not going in blind. We know his strengths. Whether or not we can do enough to completely contain him is another thing.”

If there is anything to doubt about Dupont, it may be the fact that he was one of several France players to test positive for coronavirus during the outbreak that led to the postponement of their match against Scotland.

It evidently has not affected his health enough to prevent him being named in Galthie’s starting XV, but the after-effects for France of a month without a game remain to be seen.

Some may also wonder whether all the hype is good for a player still relatively early in their career, but again Dupont’s opposition will defend him on that query.

“No matter what the hype is, what the expectation is, he’ll still deliver,” Youngs concluded.

“He just looks like that type of character and he certainly hasn’t let up yet.”

The chancellor also launches a "flexi-job" scheme so people can work for several firms at once.image copyrightGetty ImagesChancellor Rishi Sunak is set to announce...
Read more

A Guide to Amazon Prime

Although there are more people than ever who are using the internet to do business, most people don't know that their membership to Amazon...
Read more

"The Trial" in "Ali" Is a Novel Interpretation of Kafka's "The Trial"The first of the two never-before-seen movies, "Ali," is just now beginning...
Read more

Many lockdown restrictions are being lifted but hospitality businesses may only operate outdoors."I was walking around here last night and there were trucks delivering,...
Read more

People in Chapel-en-le-Frith in the Peak District collected more than 1,000 bags of donations in 48 hours.
Read more
Business

Rules on weddings were to be relaxed on 21 June, but a rise in Covid cases could ruin 'the big day'.Pre-wedding nerves are rising...
Read more
Science

Macau gambling king Stanley Ho, who built a business empire from scratch in the former Portuguese colony and became one of Asia's richest men,...
Read more

The future of healthcare is shaping up in front of our eyes mainly through digital technologies, such as artificial intelligence, VR/AR, 3D-printing, robotics or...
Read more
Business

Evergrande: Company set to update market on ‘major transaction’on October 4, 2021 at 5:28 am

It comes as a China media report says a rival firm is set to buy a big stake in an Evergrande unit.
Read more
Business

Melissa DeRosa worked as a senior aide to Andrew Cuomo, who has been accused of sexual harassment.image sourceGetty ImagesA top aide to New York...
Read more

Debbie Hewitt to become first female chair of the Football Associationon June 8, 2021 at 6:51 am

Debbie Hewitt is set to become the first female chair of the Football Association after being nominated to replace Greg Clarke.Hewitt, who is currently...
Read more
Business

The SNP won 64 seats in the Scottish Parliament - one more than last time but one short of a majority.Nicola Sturgeon has hailed...
Read more
Business