Rory McIlroy makes a disappointing start to the defence of his title at the Players Championship as he slumped to a seven-over 79 at TPC Sawgrass.

Starting on the back nine, the Northern Irishman’s opening round included a quadruple-bogey eight after finding the water twice at the 18th.

Spain’s Sergio Garcia holds the early clubhouse lead, with an eagle on his final hole moving him to seven under.

Bryson DeChambeau and Dustin Johnson are among the late starters in Florida.

McIlroy is the defending champion after winning the Players Championship two years ago, with the 2020 tournament cancelled prior to the second round because of the Covid-19 pandemic.

He made an awful start when he hooked his drive on the 10th into the undergrowth and had to take a penalty drop on his way to a double-bogey six.

The four-time major champion also three-putted the par-three 13th before hitting two balls into the water at the 18th, with another three-putt resulting in a quadruple-bogey eight that left him seven over par and 10 shots off the lead at that point.

A birdie from nine feet on the first hole saw McIlroy begin to repair some of the damage, and he made another on the second, despite again hitting a poor drive, but bogeys on the next two holes dropped him back to seven over.

He clawed one shot back at the fifth but another three-putt on the ninth saw him sign for a 79, equalling the highest opening round of a defending champion set by Sandy Lyle in 1988. 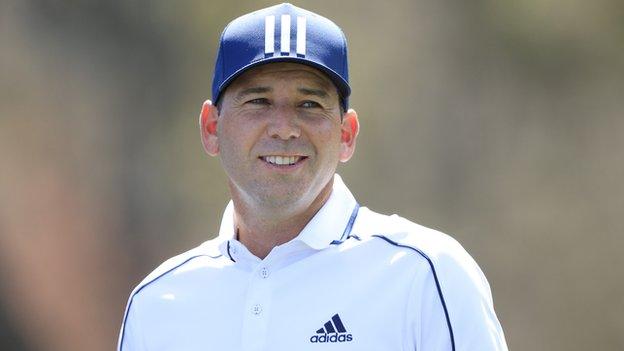 McIlroy’s struggles were in sharp contrast to his playing partner Garcia.

The 2008 champion made an eagle on the par-five 16th and birdied the seventh and eighth before holing from 18 feet for a closing eagle to complete a superb 65 – his lowest opening round at the Players Championship.

England’s Matthew Fitzpatrick is three shots behind Garcia alongside Canadian Corey Conners after carding an opening round 68, which included four birdies and a chip-in eagle on the par-five ninth.

Compatriot Lee Westwood, runner-up to DeChambeau at last week’s Arnold Palmer Invitational, is a shot further back on three under alongside American Tom Hoge.

“I built up a lot of confidence last week, putted nicely, made good par saves when I needed to and that’s what you need in these kind of tournaments where three under is a good score,” said Westwood.

“I could see going out this morning that nobody was going to burn it up, you were going to have play conservatively sometimes, smart golf, and that’s what I tried to do.”

Justin Rose withdrew from the tournament hours before his tee-time and was replaced by US Ryder Cup captain Steve Stricker.

The former world number one cited “personal medical reasons” for his withdrawal, though he pulled out mid-round from the Arnold Palmer Invitational last weekend because of a back injury.

Consumers should not have to pay excessive prices to use public car charging, MPs say.image copyrightGetty ImagesPeople must be protected from excessive pricing for...
Read more

Welterweight champion Kamaru Usman retains his title with a unanimous decision win against Colby Covington in their rematch at UFC 268.
Read more

Three boys and two girls, aged 13 to 16, are being questioned over the murder of James Gibbons.image copyrightEssex PoliceA father of four who...
Read more

A couple were sent a fine after a word on a woman's clothing was mistaken for their number plate.
Read more
Business

The Queen spoke as she officially opened the sixth Senedd term in the Welsh Parliament.The Queen commended the spirit of the people of Wales...
Read more
Business

There's more support for many in the Budget, but for some it still falls short.image copyrightEster de RoijAcross the UK a lot of people...
Read more

Amazon Prime – Why It’s The Best Deal In Shipping

Amazon Prime - Why It's The Best Deal In ShippingAmazon Prime is a term that has entered our everyday language. What exactly is...
Read more
Business

Leicester knocked out of Europa League in dramatic finish to groupon December 9, 2021 at 8:30 pm

Leicester City are made to pay for slack defending as hosts Napoli advance in the Europa League at the Foxes' expense.
Read more
Business

Novak Djokovic: Why world number one is such a polarising playeron January 10, 2022 at 9:38 am

Novak Djokovic's vaccine exemption situation before the Australian Open is the latest controversy for one of tennis' greatest but most polarising players.
Read more

FireStarter Projects — Welcome to the Metaverse

Nicky Diamonds, Known Gallery, ComplexCon and more… FireStarter is incubating eight projects with the hopes of launching all of them by December. $FLAME Token holders,...
Read more
Business

Millennials will go to extreme lengths for fame

These 5 jarring economic signals flashed red this past week

This week, a slew of data showed just how much the coronavirus pandemic and lockdowns to curb the spread of disease have damaged the...
Read more
Business