It's one of the craziest Wall Street battles in years. Retail investors, fueled by social media chatter, have been dueling with hedge funds over the price...
Read more
Science

It's one of the craziest Wall Street battles in years. Retail investors, fueled by social media chatter, have been dueling with hedge funds over the price...
Read more
Business

Social distancing, the most pivotal and controversial planks of anti-coronavirus health policy, has kept millions around the world locked at home and away from work, businesses, schools, friends and even family.

Yet as public outrage boils over in the wake of the police-involved killing of George Floyd, mass demonstrations around the world are jeopardizing efforts to prevent the spread of COVID-19. At a minimum, the protests are laying bare the contradictory messaging of public edicts to separate citizens from one another, while supporting a time-honored tradition of mass mobilization.

As regions make gradual moves to relax lockdowns, evidence suggests that moves to prevent large gatherings were already breaking down, as citizens infected by months of cabin fever defied health guidelines to create crowding in certain areas. In some cases, many aren’t even wear face coverings — stoking fears of “super-spreading” the contagion.

All of which is fanning a politically charged debate with a central question: Is social distancing dead?

“I think so,” Dan Carlin, founder and CEO of telemedicine platform WorldClinic, told Yahoo Finance in an email.

“I think many people are noticing the apparent contradiction between not being able to go to church or see their doctor while huge crowds gather in protests, many of them not completely peaceful,” he added. 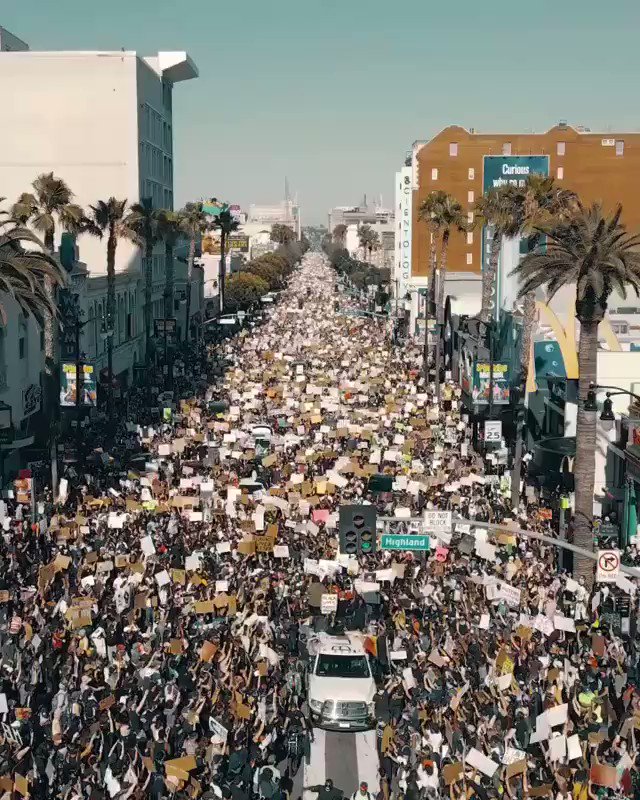 Carlin, who spent two decades as an emergency-room doctor, cited a psychological concept known as “social permission” to describe the phenomenon of people conforming to behavior of those around them, especially if they’re flouting established rules.

“In its best application, a disorganized crowd can be made an effective protest for peace if the organizers model the behaviors they want the crowd to adopt,” he said.

“At its worst, “social permission’ can become quite dangerous and a disorganized crowd can become a destructive riot if even a handful of unruly or destructive people are allowed to destroy things without being challenged,” Carlin added.

The protests and the official response have been particularly acute in New York City, which until very recently was a global epicenter of the outbreak. Gov. Andrew Cuomo has been mostly critical of the legions of people assembling in the streets, telling them they should assume they’ve been infected just as the state manages to bend its curve of casualties.

“We spent all this time closed down, locked down, masks, socially distanced. And then you turn on the TV and you see these mass gatherings that could potentially be infecting hundreds and hundreds of people after everything that we have done,” Cuomo said last week.

“We have to take a minute and ask ourselves what are we doing here? What are we trying to accomplish?” he said.

Overall, there is growing backlash against social distancing, seen crucial to states and localities taking the next steps to reopen their economies in the absence of a vaccine, but leading many to suffer emotional and psychological fallout from isolation while being shut off from public life.

Even as regions re-start, the policy will impose stiff restrictions on building capacity and crowd sizes, while changing everyday life.

“I suspect that protests make it very plain that sometimes we enforce social distance and sometimes we do not, and there does not seem to be a consistent logic behind those choices,” Carlin added. “This is a corrosive dynamic for any authority to put on its citizens and it continues, eventually the citizens will lose faith in that authority.”

Recent studies have suggested the virus is less contagious outdoors, a point that’s emboldened those who believe it may be safer to assemble in large groups where there’s a steady flow of fresh air. However, many public health experts caution that big crowds are still a health risk.

“The center of a large crowd is no different than a sealed off, unventilated room filled with potentially infected individuals – many holding large signs which will block the flow of clean air,” Berger told Yahoo Finance.

“If even one carrier of COVID-19 was present at these gatherings, we can expect to see a wave of cases appearing during the next two-to-fourteen days. Most will begin to experience symptoms five to six days after the event,” he added.

Dr. Anthony Fauci, director of the National Institute of Allergy and Infectious Diseases, told Yahoo Finance on Tuesday that protests were “obviously…a public health concern,” but that participants needed to keep COVID-19 top of mind.

“I mean, we all recognize the Constitutional right and even the compelling reason, given the situations now of people expressing their thoughts in a demonstration. So it’s not anti-demonstration at all,” he explained.

“But you have to balance that with the public health imperative that we have to not print to not spread infections. So you could tell people that it is going to be risky to demonstrate, but people will demonstrate anyway, you’ve got to be realistic,” he said, as he urged participants to maintain anti-virus protocols.

“So are our as public health officials, what we say if you are going to demonstrate in a non-violent way, a peaceful demonstration, please be sure to wear a mask all the time, to say keep physical distance is a non starter because the very nature of a demonstration, you see people in crowds, but wear a mask,” he said.

“And I know when things get animated, people start to chant [and] shout,” Fauci said. “Please resist the temptation of pulling your mask off. Leave your mask on if you do that.”

However, the sight of millions of people in the streets are undoubtedly making it harder for officials to get the public to hew to a commonly-accepted line on preventing the spread of COVID-19. That is especially true as politicians voice support for the moral imperatives of a protest during a time of societal upheaval.

“Politicians need to be more careful and should be able to segregate between their personal endorsements and think for the overall good, and not just sort of ‘in the moment’ reaction which could aid their own political aspirations and motives,” said James Richman, CEO and chief investment officer at JJ Richman.

“Instead, they need to be more mindful of protecting the entire country’s interests and think in terms of long-term effects of the situation,” he added — warning that public backing of the protests could encourage “even wider and longer” demonstrations that may be detrimental to public health.

Priyank Chopra has a lot to offer in the area of medicine. You have your basic medical and holistic remedies. You have things that...
Read more

Oscar and Serena - LoveIf you've seen Oprah Winfrey's show, you might recognize the name of her husband, O.J. Simpson. They have a...
Read more

What do massive losses in oil mean for the gold price?

(Kitco News) Oil is seeing some shocking losses as the new trading week begins, but what does it mean for gold prices going forward? Oil prices...
Read more

Credit reporting company Equifax had a data breach in which 146.6 million people's data was exposed. Data breaches like this likely led to "hundreds...
Read more

It is important to consider how to dress your employees, employees who are your sales team, and employees that are in support of your...
Read more
Science

Goldman Sachs is bullish on the world’s hardest-hit stock market. Down more than 48% this year when measured in dollars, Brazilian stocks will benefit from...
Read more
Science

Elon Musk is a ‘visionary’ that puts ‘money where his mouth is’: Neil deGrasse Tyson

Astrophysicist Neil deGrasse Tyson says the expected launch of NASA astronauts via a SpaceX spacecraft represents private enterprise “as a major player in the movement of...
Read more
Science

Turkey unveiled its most expansive program of credit incentives in four years to help the economy recover from the coronavirus pandemic. The nation’s three largest...
Read more
Science

You may have read stories about investment strategies tailored for down markets that have succeeded as the bull market in stocks ended this year. The...
Read more

With all of the hoopla over her win, the backlash that followed against Oprah in her own show was just as much. Her statements...
Read more
Business

Every six months or so, Alan Davis sets out from his seaside bungalow on a far-flung island off the southwestern coast of England carrying...
Read more
Science

For my newest spy novel, I spent several days in a world where Khalid al-Mansour has now become the president of Syria and is...
Read more

How Has Khalid and Abdul Led to Such a success?

Through the years, Khalid and Abdul can be seen on screen playing opposite one another in "American Idol"Chef." The two have been teaming up...
Read more
Science

The U.S. can’t afford to see this happen if it wants to fight the coronavirus epidemic. The CDC has urged people to call their doctors...
Read more
Science