The prevailing mood in the markets right now is neither bullish nor bearish but rather befuddled.

For investors, trying to gauge sentiment among other investors and traders is a constant undertaking, a way to sort out what bets are popular, which themes are played out and where lies the index direction that would cause the greatest surprise.

Collecting all the readings together leads to a sense that the consensus is experiencing more confusion than conviction.

And who can blame the crowd here. The S&P 500 experienced the fastest 30% drop from a record high in history, on a literally unprecedented intentional stoppage of most global commerce. From rarely seen panic levels and profoundly extreme oversold conditions, stocks snapped back in the fastest 35% rally in more than 80 years, regaining 60% of the decline but still without much support from improving real-time economic indicators.

The market has made a head-spinning round-trip, but in other ways has gone nowhere: The S&P has been sideways in a range for about a month near levels first reached in early 2018. About half of all large stocks are down more than 30% from their high, and yet in aggregate the S&P carries its highest valuation based on forecast one-year earnings since 2002.

Those wishing to make a contrarian bullish case for stocks on the premise that most investors are too cautious can point to retail investor surveys and fund flows.

The weekly American Association of Individual Investors poll last week showed bearish respondents numbered more than 50%, twice those saying they were bullish on stocks over the next six months. Bears have exceeded 50% for three of the last four weeks, quite unusual, especially when the S&P is pretty distant from its lows both in price and time. 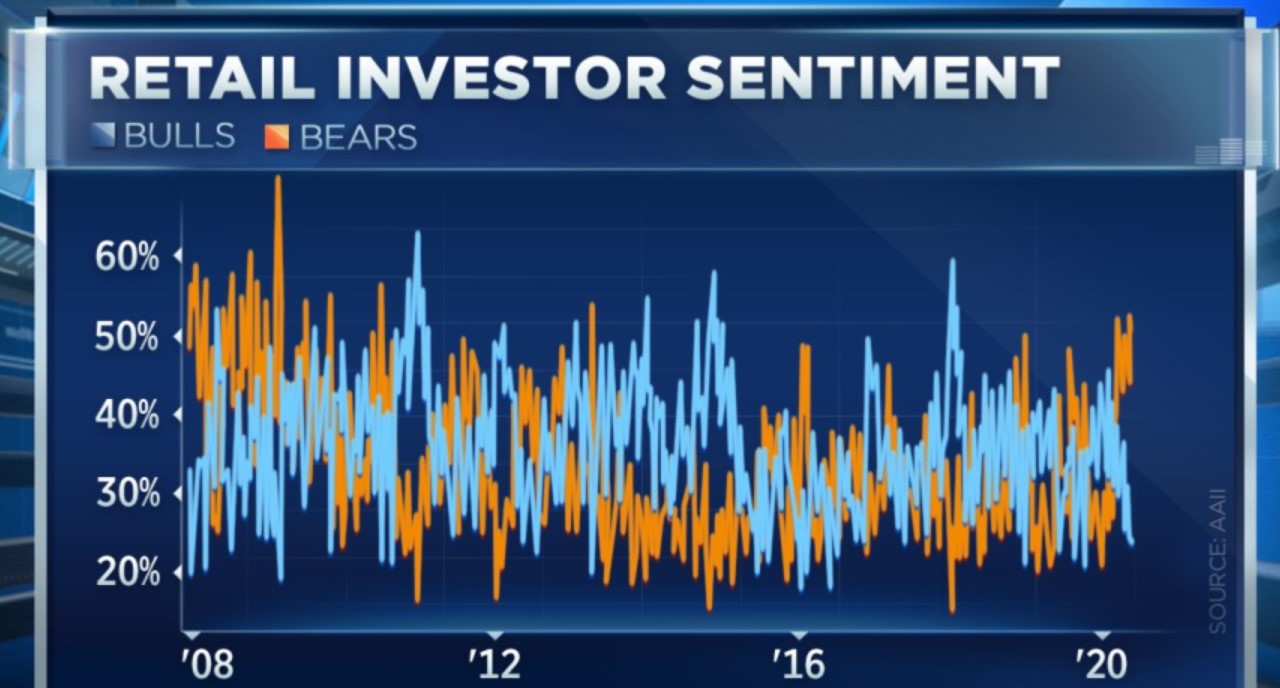 Investors pulled another $6 billion from equity funds in the latest week, according to fund tracker EPFR, taking the year-to-date net outflow to $40 billion. Meantime, an enormous $1.2 trillion has been moved out of risk assets and into money-market funds. This clearly shows longer-term public investors in a defensive posture.

But what about the pros?

Yet it’s more a mixed picture when professional investors, tactical traders and market-based behavioral indicators are pulled into the frame.

Strategists looking to make the case that the hot money has become a bit too greedy in the short term have cited a steep drop in the CBOE put/call ratio, which indicates declining demand for downside protection. While not at extreme lows – and this ratio popped higher during Thursday’s choppy market sell-off – it certainly implies traders letting their guard down. 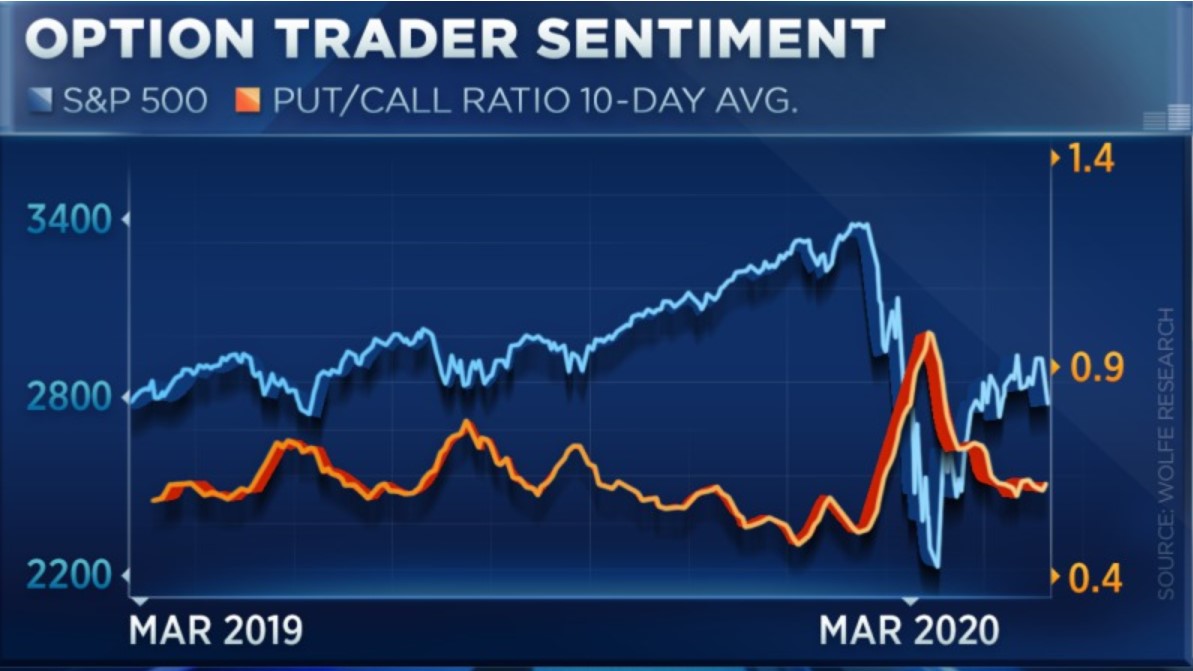 Then there is the surge in new online-brokerage account openings among younger investors seizing on the big market drop, and those stuck at home and looking for action, described here last week. Many of the most popular stocks among clients of the beginner-focused investing app Robinhood are low-share-price name-brand stocks that have been hammered, along with speculative New Economy names such as Tesla.

An influx of less-experienced investors is more a sign of frothiness than fearfulness, of course. And David Tepper, the billionaire investor and founder of Appaloosa Management, last week on CNBC noted “pockets” of excess in the market, including special-purpose acquisition vehicles (public companies that raise cash first and then search for a business to buy). Stocks that started this way include Virgin Galactic and DraftKings.

Then there are the sentiment readings that are neutral, ambiguous or offsetting.

The equity-exposure of the discretionary money managers in the National Association of Active Investment Management survey is around neutral, at 57% and in fact has receded from its rebound-rally highs. 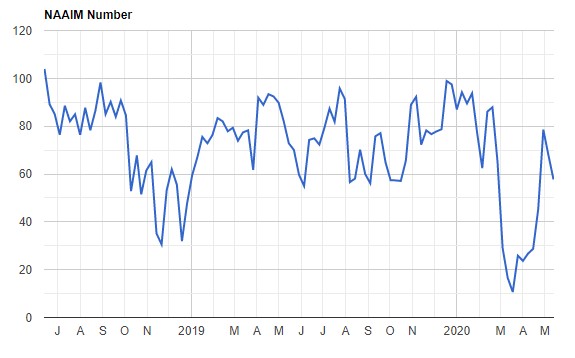 And the gauges constructed to capture risk appetites and investor positioning more broadly are in some disagreement.

Citigroup strategist Tobias Levkovich keeps a Panic-Euphoria indicator, based on several market-activity readings, that last week bumped up against the Euphoria zone, a threshold designed to reflect a high probability that the S&P 500 will be lower in 12 months’ time.

Boil it all down and it’s fair to say investors collectively are undecided on the path for stocks and the economy, in a market that’s both up a lot and beaten down, with extraordinary liquidity support from the Federal Reserve, but companies borrowing heavily simply to cover costs.

Forced to characterize sentiment, it seems more cautious than confident. The tape itself has acted as if large investors feel under-invested in equities. Last week was the fifth time since March a two-day drop in the S&P failed to stretch a losing streak to three.

The S&P 500 may have defined a temporary peak with its inability to crack above 2950 on several recent tries, but a drop to the low-2700s or even 2650 would keep intact the notion of a sideways trading range well off the March lows.

What’s clear, though, is that anyone buttressing a positive case by claiming “Everyone’s bearish” and those calling for deep downside on the notion that “Everyone is too bullish” are equally unreliable at the moment.

The airport is concerned about pressure at the border when travel rules change in England on Monday.image copyrightPA MediaPeople travelling to England from 33...
Read more

The Federal Reserve added smaller municipalities on Monday to its $2.3 trillion debt-buying program to help shore up Main Street businesses, municipalities and credit markets during the...
Read more

Former Wales captain and BBC Sport columnist Ashley Williams explains his belief that a fearless Wales side can write their own Euros success story...
Read more

Drought emergency declared in northern Italyon July 5, 2022 at 4:24 am

The drought is threatening more then 30% of Italy's farm produce, an agricultural union warns.Image source, ReutersItaly has declared a state of emergency in...
Read more

Dragons' Den star Steven Bartlett was so moved by Kwajo Tweneboa's work he offered to mentor him.
Read more
Business

KEY POINTS The NFL is planning for the 2020 season as normal, but with major contingency plans. The league has created a uniform ticket...
Read more

Prices went up by 7% in the 12 months to March, as food, fuel and energy prices continued to climb.The cost of living soared...
Read more
Business

People across Ireland came together in solidarity, rage and grief at the killing of Ashling Murphy.
Read more
Business

Collin Reeves stabbed Jennifer and Stephen Chapple inside their home after a long parking row.This video can not be playedTo play this video you...
Read more
Business

Innovative Medicines Fund launched to fast-track drugson June 7, 2022 at 12:55 am