Why Dow may be safer bet than the Nasdaq right now, according to recent market history

The Nasdaq Composite Index has led stocks back from the March market bottom. The tech-heavy index started this week with a six-day winning streak through Monday, its longest of the year. It didn’t last. Although the Nasdaq has remained above its 200-day moving average for weeks, and finished the week strong with gains on Thursday and Friday, for the week it fell into the red, turning in its worst five-day stretch since the coronavirus crash trough on March 23.

Many reasons have been cited for this week’s volatile trading, including a worrisome economic outlook delivered by Federal Reserve Chairman Jerome Powell, some ugly economic numbers, especially from the retail sector, and renewed trade tensions between the U.S. and China. But a look at recent market history suggests that a period of cooling off for the Nasdaq after a big run is not unexpected.

Since 2000, the Nasdaq’ has experienced five similar hot streaks, at least five consecutive days of gains during a  rolling three-month period when it outperformed the Dow Jones Industrial Average by 10% or more. After those Nasdaq rallies, short-term mean reversion tended to occur, with the Nasdaq more likely to sell off and the Dow more likely to gain, according to data from hedge fund trading platform Kensho. 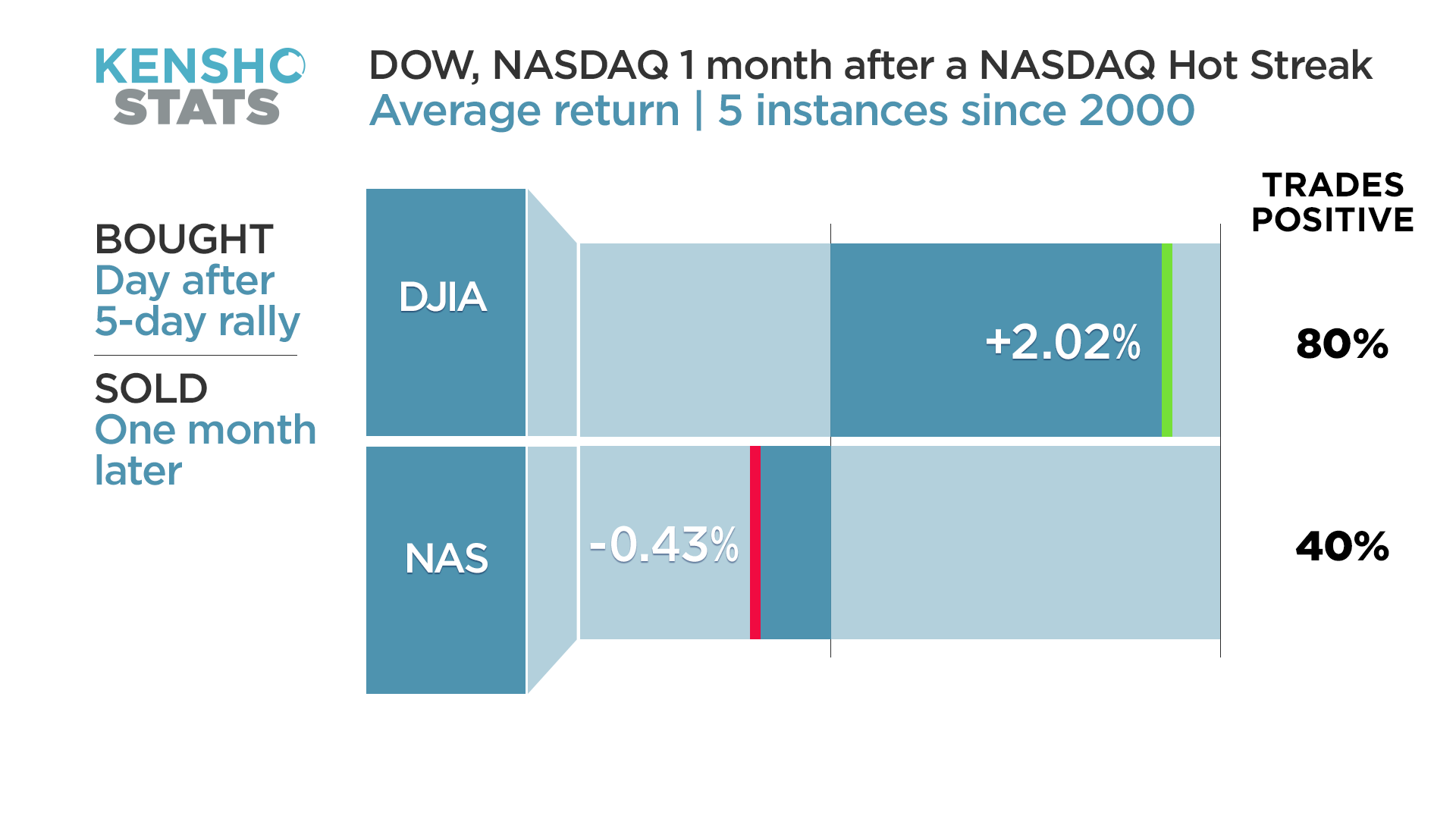 The Kensho data shows that over five similar periods of big gaps between Nasdaq and Dow performance, the first occurring in 2003, in the one-month periods that follow, the Dow has been the better bet. It has averaged a positive return of 2.02% and has traded positively in four of the five months. The Nasdaq, meanwhile, has posted an average return of negative 0.43% (-0.43%) and has traded positive in just two of these five month-long periods after its big runs.

If that pattern holds, it will occur beyond this week’s action. The Nasdaq was not the biggest loser this week. The Dow and S&P 500 were both down even more than the Nasdaq, but all had their biggest weekly losses since the week of March 20, when they dropped more than 12%.

“Given the amount of uncertainty about this crisis that still looms, we should not be surprised by the setbacks we’ve seen in markets this week,” Scott Knapp, chief market strategist at CUNA Mutual Group, told CNBC.

Tech’s strength is being viewed by some as a permanent change, with the biggest technology firms — Microsoft, Apple, Amazon, Alphabet and Facebook — now representing more than 20% of the S&P 500, and the top five holdings by weight in the Nasdaq. Three of these companies are currently valued at over $1 trillion: Microsoft, Apple and Amazon (Alphabet is not far behind).

“The Covid-19 pandemic has reinforced the essential role that technology plays for businesses and consumers and stoked expectations that the recession could see many of the largest growth companies become even more dominant,” Salvatore Ruscitti, U.S. equities strategist at MRB Partners, told CNBC earlier this week.

Some prominent investors are worried about ceilings in these tech stock values, and the market more broadly. Speaking Wednesday on CNBC’s “Halftime Report,” billionaire hedge fund investor David Tepper said the stock market is one of the most overpriced he’s ever seen, only behind 1999, and he said Amazon, Facebook and Alphabet may be “fully valued.”

On the last day of the six-straight gainers for the Nasdaq, on Monday, Amazon, Apple and Microsoft all rose more than 1%, posting their sixth consecutive day of gains.

“The market is pretty high, and the Fed has put a lot of money in here,” the founder of Appaloosa Management said. “There’s been different misallocation of capital in the markets. Certainly you are seeing pockets of that now in the stock market. The market is by anybody’s standard pretty full.”

Some investing icons say the market outlook all comes down to the public health response success or failure.

“There’ll be a shift in focus from liquidity issues somewhere down the line to solvency issues. If we don’t find a vaccine or a cure, if we don’t find a much better way of testing at scale … then I think the market’s going to have a much more difficult time,” Paul Tudor Jones, founder of Tudor Investment, said on CNBC’s “Squawk Box” on Monday.

Priyank Chopra has written one of the best books on the subject of quantum physics. Quantum physics is an area of science that cannot...
Read more

Alex Shi says her comedy comes from her Chinese heritage but she feels more comfortable performing in a foreign language.
Read more

Liverpool boss Jurgen Klopp says it is up to Mohamed Salah over whether the forward signs a new deal with the club.
Read more

There are less than 1,000 siberian tigers living in the wild.
Read more

Temperature records have been broken in Spain and France as a heatwave sweeps across Europe.Firefighters have been battling wildfires across Spain as the country...
Read more
Science

The Super Bowl is in San Francisco next year. As the name of the game suggests, the games pits some of the best teams...
Read more

Friends Rachael and Jo have created a care package for people who play football while menstruating.
Read more
Business

Emma Raducanu: US Open champion beaten in first match since Grand Slam winon October 9, 2021 at 4:32 am

Britain's Emma Raducanu loses on her return to court for the first time since her US Open triumph.World number 22 Raducanu was seeking an...
Read more
Business

Japan's Hideki Matsuyama shoots a 65 on Saturday to take a four-shot lead into the final day of the Masters, with England's Justin Rose...
Read more

The UK foreign secretary is facing calls to quit over his handling of evacuations.image sourceReutersForeign Secretary Dominic Raab has defended his decision not to...
Read more
Science

We have plenty of food, so why are grocery store shelves so empty?

Grocery store shoppers are being met with empty store shelves, not because there is a shortage of food, but because the nation’s food supply...
Read more
Business

Why You Should Stay Away From Priyank Chopra and His Mentalism

Priyank Chopra is well known for his bestselling books, including, Mastering the Art of Living, The Secret, Living the Dream, and More to Come....
Read more
Business

The papers report concerns about a looming cost of living crisis and the latest twist for Novak Djokovic.
Read more
Business