US is risking a second coronavirus wave and a depression, economist Mark Zandi warns

Ministers say coping even with low levels could cost the country billions of pounds a year.
Read more
Business

Tonga eruption: How its impact spread so widely and violentlyon...

The impact of a massive eruption in Pacific has been felt around the world.
Read more
Business

Downing Street party: My constituents are 60 to one against...

Conservatives have been hearing local opinion on the ongoing row about No 10 parties during lockdown.Conservative Steve Baker has said his constituents are "about...
Read more

It may be the economy’s make or break moment.

Mark Zandi of Moody’s Analytics is getting increasingly worried states are taking a large gamble by reopening businesses too quickly.

He warns a spark in new coronavirus infections would send the economy further into tailspin — especially since there’s no vaccine.

“If we get a second wave, it will be a depression,” the firm’s chief economist told CNBC’s “Trading Nation” on Friday. “We may not shut down again, but certainly it will scare people and spook people and weigh on the economy.”

Zandi defines a depression as 12 months or more of double digit unemployment.

On Friday, the Labor Department reported the April jobless rate soared to 14.7%, and non-farm payrolls tumbled by 20.5 million. Both sets of employment data are post-World War II records. 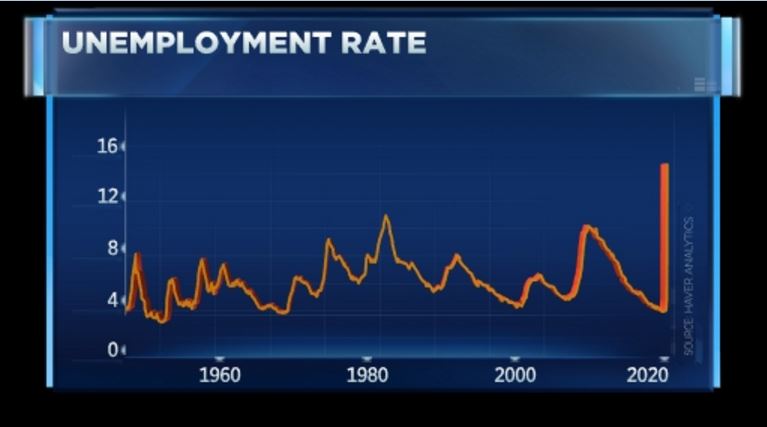 The market seemed to take the data in stride. The Dow, S&P 500 and tech-heavy Nasdaq closed almost 2% higher on Friday.

“The market is casting a pretty high probability of a V-shaped shaped recovery,” said Zandi. “The horizon may be a little short term: Next month, the month after, the month after that.”

Zandi predicts jobs will start to rebound by Memorial Day weekend as businesses reopen. If there’s no second wave, he estimates the gains will flow through the summer into early fall.

“After that, I think we’re going to be in quicksand because of the uncertainty around the virus and the impact that it’s going to have on consumers and businesses,” he added.

Zandi has been warning Wall Street about the coronavirus threat since winter. In late February, he told “Trading Nation”  the Street was underestimating the damage from a pandemic. His forecast came before states imposed strict lockdowns to contain the spread of the virus.

For the economy to get back on track, he contends it’s necessary to get solid progress on a vaccine. A delay or failure to come up with a vaccine within the next year or so would also cause a 1930s-type downturn, according to Zandi.

“It’s critical. It’s a necessary condition for the economy to fully recover,” Zandi said. “We’re going to see the market reevaluate things at some point. ”

Where’s my stimulus check? Will there be another round of payments? Answers to your top questions

KEY POINTS As millions of Americans face job losses or reduced income, they are looking to the government for financial help. A first round...
Read more

Video-sharing platforms have a legal duty to enforce strict rules - or be fined or even suspended.
Read more

For pals James and Nathan, the awards are about more than hauling badly-packed rucksacks up hills.image copyrightDave KirtonWhat does the Duke of Edinburgh's Award...
Read more

Ali Harbi Ali, charged with the murder of Sir David Amess MP, appears via video at the Old Bailey.The man accused of killing the...
Read more

Film producer, actor, and musician Ben Stranahan, known in Hollywood as the man without a huge ego, is brave enough to show me a...
Read more

Lewis Hamilton has a 10-place grid penalty at Sunday's Turkish Grand Prix after receiving a penalty for using too many engine parts.
Read more
Business

U.S. stock-index futures edged slightly higher, in lightly traded action, Monday evening, coming off a slump for stocks in the regular session, on the...
Read more

China's Zhao Xintong opens up a 5-3 lead over Belgium's Luca Brecel in the final of the UK Championship in York.
Read more
Business

Manchester United v Liverpool: Hundreds of fans in anti-Glazer protest at Old Traffordon May 13, 2021 at 7:11 pm

Hundreds of Manchester United fans protest against the club's owners while the team and Liverpool arrive at Old Trafford for a Premier League fixture.The...
Read more

Neiman Marcus Group Inc. is preparing to file for bankruptcy protection as soon as Wednesday, with plans to restructure its debt in hopes of...
Read more
Business

FacebookTwitterTumblrSave Erika’s one of the most inspiring women for the Latina community. She started with nothing. Coming to the USA at a young age with...
Read more
Home of Science
Facebook
Instagram
LinkedIn