California Gov. Gavin Newsom was surprised on Monday when a reporter informed him that Tesla has already reopened its Fremont factory to resume production.

“As it was just mentioned, I need the details of that. My understanding is when I walked up to the podium today that wasn’t the case. I’m trying to monitor hundreds of thousands of businesses all throughout the state of California,” the governor said at a Monday news conference.

Tesla reached out to employees on Friday to schedule shifts. Over the weekend, Elon Musk took to Twitter to announce that Tesla was filing a lawsuit against Alameda County, where Fremont is located, and would take Tesla’s headquarters and possibly all of its operations out of the state in response to the Covid-19 health orders.

Musk had previously called shelter-in-place orders and other health orders affecting Tesla “fascist.” After Newsom’s press conference, Musk tweeted that “Tesla is restarting production today against Alameda County rules. I will be on the line with everyone else. If anyone is arrested, I ask that it only be me.”

Three Fremont employees told CNBC that they were scheduled to return to work this week, but only wanted to if the factory is deemed safe amid the pandemic. The employees requested their names not be disclosed, as they were not authorized by the company to conduct press interviews.

One said they had begun to look for another job, fearing that they would not be able to adhere to the safety protocols, including social distancing and other measures, recommended to protect against Covid-19 while assembling cars in Fremont. Failure to adhere to the protocols could result in their getting sick, or fired, and then ineligible for unemployment, they said.

At the plant, employees often do physically tiring tasks in close proximity, while touching the same equipment. They do not have much time to take leave to wash their hands, the employees all noted, and bathrooms at the factory aren’t always in a pristine condition.

CNBC asked local authorities how they would respond to Tesla’s reopening its factory against county health orders and the recommendations of Interim Public Health Officer Dr. Erica Pan.

A spokesperson for the Fremont district supervisor’s office in Alameda County, Shawn Wilson, wrote in an emailed reply: “The Order states that your question of enforcement is left up to the local policing agency, so your question should be directed to the Fremont Police Department. If Tesla violates the order, it would be Fremont Police Department’s decision to enforce or not enforce.” 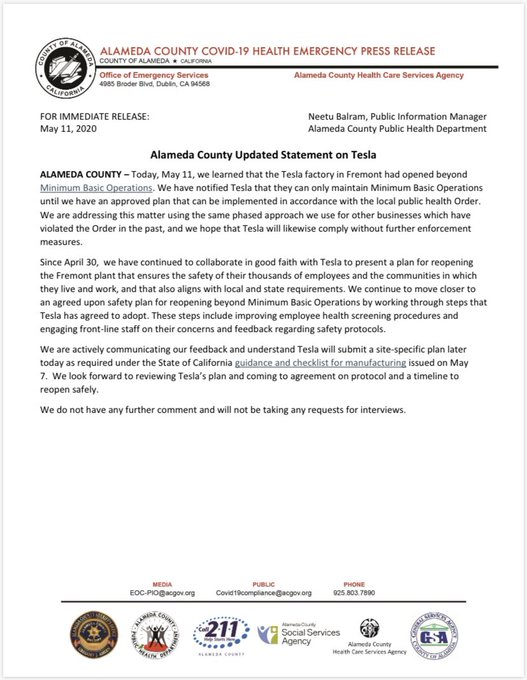 : “Today, May 11, we learned that the Tesla factory in Fremont had opened beyond Minimum Basic Operations. We have notified Tesla that they can only maintain Minimum Basic Operations until we have an approved plan that can be implemented in accordance with the local public health Order.”The county also noted, “We are actively communicating our feedback and understand Tesla will submit a site-specific plan later today as required under the State of California guidance and checklist for manufacturing issued on May 7. We look forward to reviewing Tesla’s plan and coming to agreement on protocol and a timeline to reopen safely.”

The Fremont Police Department did not respond to requests for comment.

TSX Gains Over 5% Amid Signs Of Slowdown In Virus Spread

The Canadian stock market ended on a high note on Monday on hectic buying at counters across the board after data showed the number...
Read more

Jordan Mangan, commonly known as Buckethatboyyy on TikTok, has grown to over 110,000 followers in a matter of months. He is a 16- year...
Read more

KEY POINTS Tesla filed suit against California’s Alameda County, where it has a factory, following through on a statement CEO Elon Musk made on...
Read more

KEY POINTS The Supreme Court is looking eager to weigh in on the Second Amendment weeks after it punted on its first substantial gun rights...
Read more

A Masterclass for Advisors on Turning Complexity Into Simplicity

APR 2, 2020 1:12PM EDT “Knowledge is a process of piling up facts. Wisdom lies in their simplification.” – Martin H. Fischer The...
Read more
Science

Everything You Need to Know About Casual Clothing

Business casual clothes can be just as formal as your business attire should you choose to wear them. Business casual is much like a...
Read more
Science

As the coronavirus outbreak evolves, we answer some key questions

As a new coronavirus that has infected more than 1 million people around the world continues to spread, scientists and public health officials are...
Read more

Many more people have had coronavirus with no symptoms, study suggests

Resize icon A flood of new research suggests that far more people have had the coronavirus without any symptoms, fueling hope that it will...
Read more
Science

The hottest shows of 2020, for men and women, will be determined by the fall TV season as well as the sales of some...
Read more

If you are interested in predicting the hottest shows of 2020, your best bet is to read this article. You will learn the type...
Read more
Science

Business Administration Degree Programs - Learning to Run a BusinessWith the career options and specializations available for students of business administration, there is...
Read more
Science

Amazon.com Inc. topped $75 billion in sales in the first quarter as COVID-19 swept across the globe, but profit declined and the company said...
Read more

Business Letter FormatA business letter is one of the most important pieces of correspondence for any business. If the process of the business...
Read more
Science

Markets enter the eye of the coronavirus storm: The last month has been extraordinary, but now we're seeing signs that the market is starting...
Read more
Science

Employee experience is the single most crucial element for any company’s survival.  Some organizations are endlessly fixated on making sure their customers are happy. After...
Read more
Home of Science
Facebook
Instagram
LinkedIn