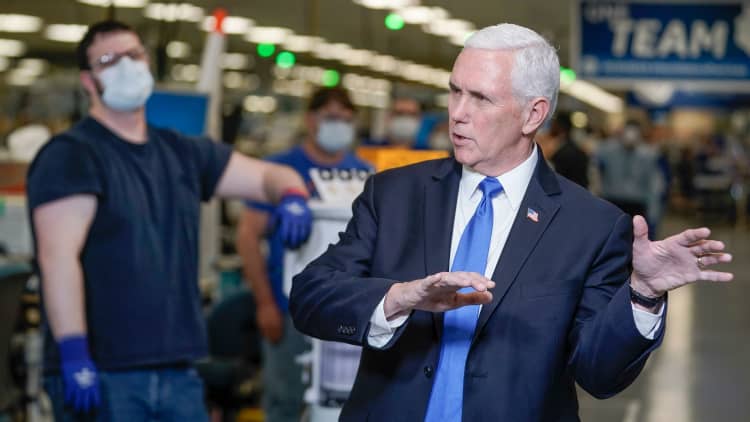 Katie Miller did not respond to multiple requests for comment from CNBC.

Pence was scheduled to travel to Des Moines, Iowa, in the morning, but his departure from Andrews Air Force Base was delayed by nearly an hour as staff dealt with news of the diagnosis. Reporters traveling with Pence said several staffers disembarked from Air Force Two just before takeoff.

Those staffers left the plane because they had been in contact with the staffer who tested positive, NBC News reported. In response to the positive test, the White House medical office has embarked on a program of contact tracing for the individual, an official told NBC. Some of these staffers have already been retested.

As of Friday, more than 75,000 Americans have died of Covid-19, and more than 1.2 million have tested positive.

Yet Pence and Trump by and large refuse to wear masks, despite a recommendation from the Centers for Disease Control and Prevention that face coverings be used to help prevent the spread of the coronavirus.

Trump has never been inclined to wear a mask. Moments after the CDC issued its initial guidance on masks in April, the president said, “I don’t think that I’m going to be doing it.”

This has not changed, even with news of his valet’s positive test. On Friday Trump attended an event to mark the anniversary of VE Day, and neither he nor first lady Melania Trump wore a mask.

Air Force Two sits on the tarmac at Peterson Air Force Base after Vice President Mike Pence delivered an address at the Air Force Academy graduation on April 18, 2020 in Colorado Springs, Colorado.

Pence drew widespread criticism late last month for not wearing a mask during a visit to the Mayo Clinic in Rochester, Minnesota. Pence later said he should have worn one there, but that he didn’t think it was necessary because he is tested frequently for the coronavirus.

The president said Thursday that he and Pence would begin taking daily coronavirus tests, an increase from the weekly tests that had been White House protocol.

There was no word on whether staffers would also be given daily tests. Currently, the White House tests visitors who will come into close contact with the president before they meet with him, checks temperatures for press, and provides weekly testing for staffers.

On Friday, Trump held a meeting with Republican lawmakers at the White House where neither he nor anyone else wore a mask. During the meeting, Rep. Louie Gohmert, R-Texas, said they had all been tested before the meeting. “Nobody in here has the coronavirus, unless it’s the media,” he added.

Trump’s valet, a member of the military, reportedly had very close contact with the president, including serving meals and helping him with his clothes and other personal needs.

U.S. Vice President Mike Pence stands among television soundmen, radio reporters and other media personnel all wearing protective masks because of the coronavirus disease (COVID-19) pandemic as he listens to Donald Trump speak during an event in honor of National Nurses Day in the Oval Office at the White House in Washington, U.S., May 6, 2020.

Oprah Winfrey was born in 1926 in Houston, Texas. She grew up on the Third Ward, an area in the city that was hard...
Read more

JetBlue, Democrats spar over crew pay cuts: ‘Literally no hours for our crew members to work’

JetBlue Airways (JBLU) on Thursday defended itself against accusations from a group of Democratic senators who called out the air carrier for cutting wages...
Read more

Sabre Corporation is a leading manufacturer of world-class golf clubs, apparel and equipment. Sabre was formed as the merger of two companies, American Golf...
Read more

Oprah Winfrey, the longest running talk show host in American history, has an international following. From the Philippines to Pakistan and from India to...
Read more

Death of Khalid Suri, IndiaKhalid was found dead in his car in front of his home. Khalid's car was not his usual one,...
Read more

Amazon Prime's Electronic Delivery ServicesAmazon Prime has been getting lots of buzz and it is the hottest item for folks who are on...
Read more
Science

Beyond Meat heads to China as plant-based protein continues to grow, with a little help from COVID-19 outbreak

The market for plant-based protein continues to grow, undeterred by the COVID-19 pandemic. The outbreak may actually be helping to drive growth, some industry...
Read more
Science

Priyank Chopra has been a professor in the department of science and technology at the University of Michigan since 1983. He holds degrees in...
Read more

The Al Aqsa Islamic Center in San Bernardino is located in a very large building. They usually have a large kitchen and it is...
Read more
Science

What Treatment Options Are Available For Mesothelioma?

Mesothelioma is a rare form of cancer that mainly affects the mesothelium, a layer of membrane that covers the abdominal organs and internal organs....
Read more
Science

In the busiest earnings week of the season, Thursday is the biggest act. Two trillion-dollar companies — Apple Inc. AAPL, +1.01% and Amazon.com Inc. AMZN, +1.86% — will follow the successes...
Read more

Super Bowl is a Game Show That is Open to All

After four Super Bowls and millions of fans who can be found from coast to coast, one can say that the Super Bowl is...
Read more
Science

Super Bowl 2020When the Super Bowl rolls around again I am hoping that I am still alive to see it. If I am...
Read more
Science

Listing the Hot Shows of 2020To list the hottest shows of 2020 would be difficult because there is no reliable information on the...
Read more

How to Save Money With Amazon Prime Membership

It's no secret that Amazon Prime membership is a great way to receive free shipping and other services when you shop with them. However,...
Read more
Science

Business Cards That Is Uniquely You

Many people think that all business cards are the same. While it's true that there are a few different companies out there that produce...
Read more
Home of Science
Facebook
Instagram
LinkedIn