Coronavirus and COVID-19 are probably the most searched words in 2020. We’ve watched the virus outbreak bring the world’s health, economy, and markets to a damaging halt. Now as the “curve” begins to flatten, and talk shifts to reopening the economy in a safe and responsible way, the focus moves to finding a medical solution to the problem.

The benefit of a treatment or vaccine would go far beyond the company or organization that finds it. It would stabilize the pervasive fears affecting our lives, our health, and the global economy. There are many companies and health institutions working to find a cure for this global issue. Here are some of the most promising thus far. 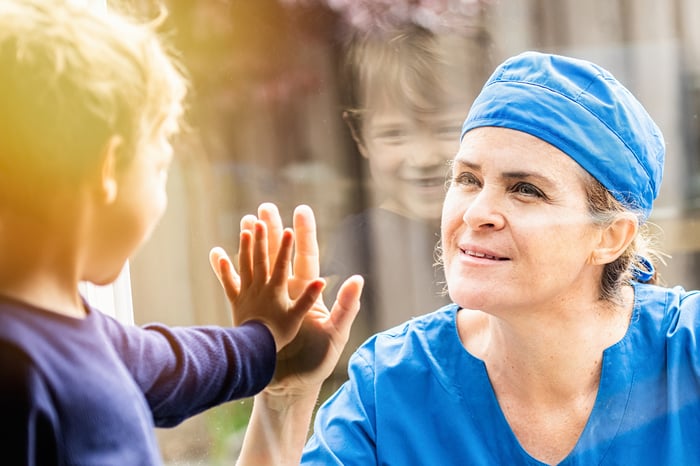 Treating patients who are already sick

Gilead Sciences (NASDAQ: GILD) has been the most talked-about name since the initial outbreak. The health juggernaut that created a cure for hepatitis C has seen its stock rise and fall in anticipation of a successful treatment for the novel coronavirus.

Gilead has been trending even more in recent weeks after news broke that its drug remdesivir showed strong potential. The antiviral medication was first developed to treat the Ebola virus but the clinical evidence didn’t support its efficacy for that indication. The drug is now in clinical trials to treat the symptoms of COVID-19.

The conversation around remdesivir has been mixed as conflicting news about the likelihood of its success emerged. Remdesivir has been tested at the University of Chicago Medical Center in a phase 3 clinical trial where “rapid” recoveries from the brutal symptoms of the virus were prevalent, according to STAT News. After the initial positive reports sent the stock up, volatility ensued after news on April 23 that drug trials in China appeared to have failed.

On Friday, the drug received emergency use authorization from the Food and Drug Administration to treat COVID-19 patients who are “severely ill”.  This is by no means a done deal. Many have noted the treatment’s shortcomings, including failure to lower death rates. Trials so far have focused heavily on recovery times, ignoring broader criteria. The authorization is temporary, and it will still need more testing and to gain the full go-ahead of an FDA approval. Dr. Anthony Fauci, head of the National Institute of Allergy and Infectious Diseases, gave the treatment its due while noting it’s “not a knockout”.

In terms of production and distribution, Gilead is working to increase the availability of remdesivir. Currently, there’s enough of the drug to treat 150,000 patients. The company’s CEO Daniel O’Day made it clear that this supply would be provided for free. There is no word on what the drug could ultimately cost, so it is difficult to say what financial impact this will have on Gilead’s bottom line. Again, the true gains will benefit society on a larger scale.

Many attempts to develop and produce vaccines

Pfizer (NYSE: PFE) has sparked chatter after taking an aggressive stance in the battle to end the outbreak. The company’s head of vaccines, Nanette Cocero, said Pfizer aims to have a minimum of 10 million doses of a vaccine by the end of the year, or possibly as many as 20 million doses.

Pfizer is working to develop the vaccine with a German company called BioNtech (NASDAQ: BNTX). The treatment is aimed at emergency use, but there’s hope it will prove to be more than that. Because this is so new, and the trials are just now getting underway with the first humans being tested in Germany and the U.S., there’s plenty of uncertainty.

In March, Johnson & Johnson (NYSE: JNJ) was one of the first companies to announce that it would begin a clinical trial for a potential vaccine. The catch is, the company doesn’t expect those trials to begin until this fall. Trailing the competition by a significant amount of time in terms of testing, it might miss out.

But Johnson & Johnson’s scale of operations could differentiate its efforts. The company noted that by early next year, it could produce up to 900 million doses, making it capable of treating 260 times more patients than are currently infected. Recently the company signed a deal with Catalent to manufacture the vaccine. The deal reinforces Johnson & Johnson’s slower timeline, with manufacturing set to be ready by January, but it also backs up the conglomerate’s ability to mass produce at a larger capacity than many others.

GlaxoSmithKline (NYSE: GSK) partnered with Vir Biotechnology (NASDAQ: VIR) in a joint attempt to create antibody treatments for the virus. In early April, the drugmaker announced it would invest $250 million into Vir as part of the deal. The tactic being used revolves around taking antibodies from those who have recovered from COVID-19 and transferring them to sick patients.

Will these stocks benefit?

Many factors play into whether any of these businesses will have big financial gains from treatments or vaccines for COVID-19. It’s not cheap for a company to test and make a new drug. Not all of these efforts will lead to success. To that end, many companies might be pouring money into what becomes a dead end.

Another factor is federal involvement. A lot of federal money has been thrown into this fight, with labs and doctors operating on grants in order to carry out research. This government involvement could hold sway in the pricing of eventual vaccines or drugs. Moderna (NASDAQ: MRNA) CEO Stephane Bancel said in early March that the company would not charge an extremely high price for a vaccine, going so far to say that they might price it below a vaccine for pneumonia. The company recently made a deal with Switzerland-based Lonza, a manufacturing company, to produce its potential vaccine.

Companies with successful treatments may face pricing pressure from governments, creating a great deal of uncertainty in just how profitable a cure or treatment would be. Investors already know Gilead Sciences plans to largely provide its initial supply of remdesivir for free.

These are the companies that I believe warrant following. There isn’t enough information yet to buy a specific stock based on its treatment or vaccine potential. Picking a stock at this point involves much guesswork, which isn’t an ideal investment strategy. Currently, Gilead Sciences has had actual progress in treating the symptoms caused by the coronavirus. Still, it’s not clear that remdesivir will establish itself as the “go-to” regimen. Furthermore, the pricing for the drug has not been established yet.

To me, the best strategy is to keep these stocks on a watch list as the situation develops. They are all decent stocks to choose in their own right based on their long-term businesses outside of their COVID-19 work, but it’s premature to say which one will come out on top in the search for a coronavirus cure.

The London Fire Brigade declares a major incident after a number of fires break out across the capital.Thick, dark smoke rose from fields and...
Read more

How Can I Stop Lawyers From Stealing My Money?

Having a mesothelioma attorney helps you stop the lawyers and the compensation you deserve. Mesothelioma is a serious lung cancer, which is the most...
Read more

The system is geared to crisis intervention but struggling families need help earlier, says the lead of a major review.Child protection in England needs...
Read more

Some papers lead on President Zelensky's UN speech while others focus on children caught up in the war.
Read more
Business

Yasmin Chkaifi told a friend she feared being murdered by Leon McCaskre, who killed her on Monday.Image source, Met PoliceAn arrest warrant had been...
Read more

Netflix is a great site to promote your business because the popularity of this site is high. Everyone has access to it. There are...
Read more
Business

Lawyers for Reclaim These Streets event go to the High Court after police say it would be unlawful.image copyrightPA MediaOrganisers of a vigil in...
Read more
Business

England's defending champion Jack Laugher performs the wrong dive in the first round of the preliminaries of the men's 3m springboard and is awarded...
Read more

Dorset Council says it will correct the "mix up" with the walkway's new surface.
Read more
Business