For those who haven’t been tuning in to the daily White House coronavirus press briefings over the past several weeks, the woman now going viral for her reaction to the president’s floating UV light and disinfectant injections as possible coronavirus treatments on Thursday may be an unfamiliar face.

In fact, Dr. Deborah L. Birx, 64, is a world-renowned global health official and a retired U.S. Army physician who was instrumental in HIV/AIDS vaccine research, and whose career has spanned three decades. And ever since Vice President Mike Pence appointed her as the response coordinator for the White House Coronavirus Task Force — one of two women on the team — she’s been on national TV almost daily, often alongside Dr. Anthony Fauci, the nation’s top infectious-disease expert.

Birx has been a scene stealer before — such as when she warned younger Americans that they were not immune to COVID-19, stating, “millennials are the key” to stopping the spread of the virus.

But her body language as President Trump suggested bright-light treatments and disinfectants to fight the coronavirus on Thursday — sitting still, taking a deep breath, blinking, setting her face still and then staring at the ground — went viral on Twitter TWTR, +3.15% on Friday. Some criticized her for not standing up and refuting the president’s comments immediately.

Read more:Trump suggests disinfectant as treatment for coronavirus ‘by injection inside or almost a cleaning’ — later says he was speaking ‘sarcastically’

Others set the clip to the theme music from HBO’s T, +0.71% “Curb Your Enthusiasm,” or joked about her facial expression. “You can see Dr. Birx’s soul leave her body,” snarked one tweet.

Dr Birx is all of us right now 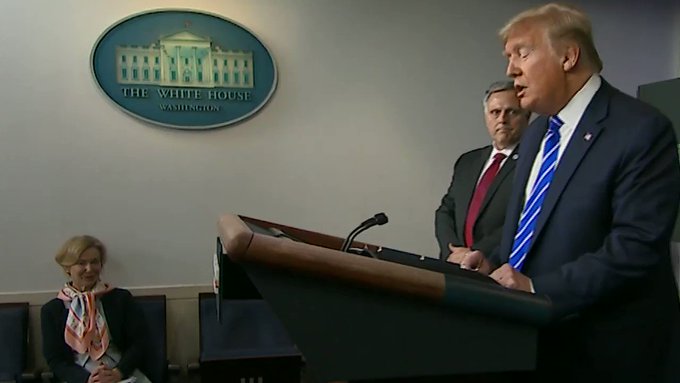 3,370 people are talking about this

OMG, I so needed this laugh.
Trump’s derangement and Birx reaction set to Curb Your Enthusiasm. 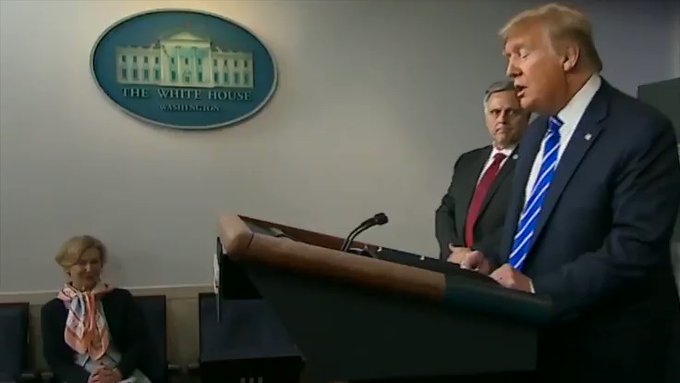 543 people are talking about this

The president has since responded that he was asking the questions “sarcastically,” and the White House press office accused the media of taking his comments “out of context.”

For those curious to learn more about Birx, however, here are five things to know about the ambassador-at-large’s 30-year career, and her current role as the federal coronavirus response coordinator.

She was always a science buff

Birx grew up in Pennsylvania, where she and her two older brothers converted the backyard shed into a makeshift lab. Their most notable invention: a satellite-dish antenna that they moved around on roller skates, the Society for Science & the Public reported. When Birx was a junior at Carlisle High School in Pennsylvania, she competed in the 1973 International Science and Engineering Fair in San Diego. Her project on paleobotany in the Carboniferous period scored the trophy for girls grand champion, plus a chance to compete in the Army and Navy’s International Science and Engineering Fair (which she won). She eventually put herself through medical school at the Hershey School of Medicine at Penn State, the Hill reported.

She has a military background

Birx trained in internal medicine and clinical immunology at the Walter Reed Army Medical Center and the National Institutes of Health, according to her biography on the Department of State website. She began her government career as a military-trained clinician in immunology, mainly researching HIV/AIDS vaccines, in 1985. She attained the rank of colonel, and as Col. Birx received two prestigious U.S. Meritorious Service Medals and the Legion of Merit Award. She was named the director of the U.S. Military HIV Research Program at the Walter Reed Army Institute of Research, serving from 1996 to 2005. And she led “one of the most influential HIV vaccine trials in history,” her bio states.

She’s worked closely with three U.S. presidents — and was dogged in getting George W. Bush’s attention

When Bush announced his President’s Emergency Plan for AIDS Relief (PEPFAR) in 2003, Birx flew back from Kenya and waited outside of the then-director of the Office of National AIDS Policy’s town house for almost a week to get a meeting with him. She had been working on HIV vaccine research in Africa for almost six years at that point. So she showed him a 180-slide PowerPoint presentation “until he agreed … to let the Army also be part of PEPFAR,” she told a George W. Bush Presidential Center podcast in September. “I was not leaving his office, and so I wore him down.”

Birx was later appointed ambassador-at-large and global AIDS coordinator by President Barack Obama, and she has overseen PEPFAR at the State Department for the past six years. Now she is also aiding the government response to the coronavirus under the Trump administration. Vice President Pence has described her as his “right arm” in that role.

Her signature scarves have built a following

As Birx tends to wear patterned silk scarves during the daily White House coronavirus briefings, viewers have taken note, and even fashion cues, the Wall Street Journal reported. Instagram FB, +2.66% accounts dedicated to her neckwear have sprung up, including @deborahbirxscarves and @deborahbirxscarfqueen. Some followers have posted pictures of themselves sporting similar scarves to hers on Twitter:

Zooming with the girls and raising a scarf to dr birx!!! 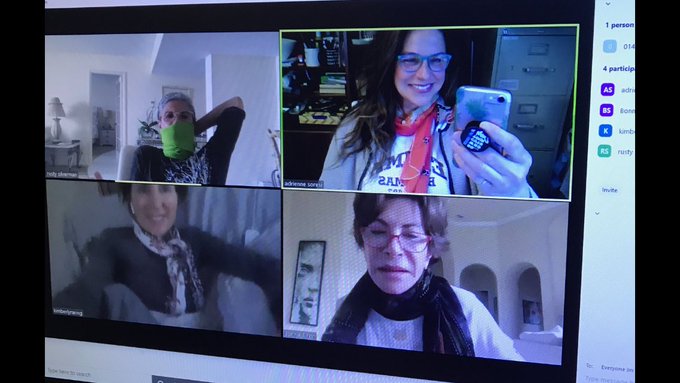 My 5 year old asked if she could wear a scarf like Dr. Birx… #nailedit #drbirxscarves 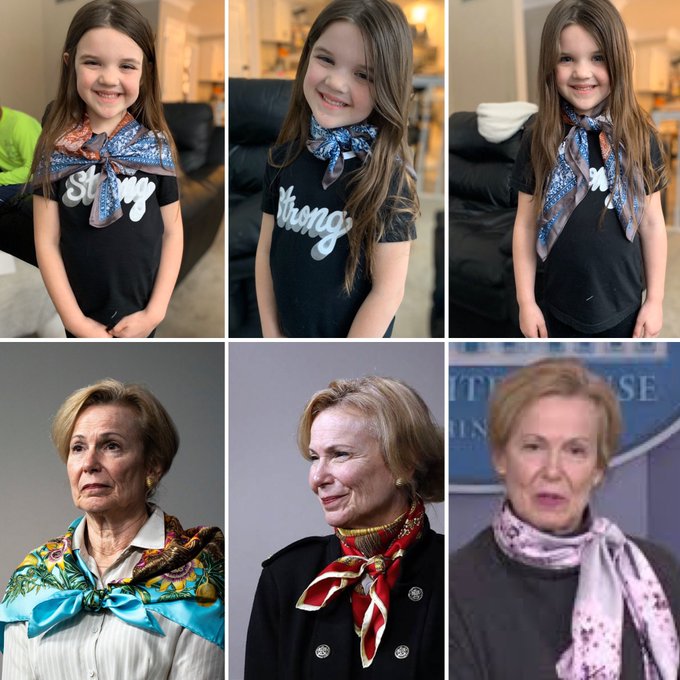 Why was Birx sporting scarves even before people started using them as makeshift face masks during the pandemic? Turns out, it’s one of her tips for packing lightly and sticking to just one carry-on bag when traveling for work. “I take relatively plain dresses, black and other colors, that you can then change the scarves on, and through that it looks like it’s a totally different outfit,” she told the Strategerist podcast last year.

She throws one heck of a Christmas party

Birx takes a hands-on approach to all of her work, including her annual Christmas Eve party. The Washington Post revealed in a lengthy profile that she hosts a 24-hour buffet for almost 100 people in her home on Christmas Eve every year, and that she and a deputy cook all of the food themselves. “It’s important that I do this myself,” she said. “We do this to show love.”

The Post profile also notes that she graduated from high school at 16, got married and graduated from college at 20, finished medical school at 23 and had her daughters shortly after — so she’s juggled work and home responsibilities through her entire career. On weekends in the 1980s, “Birx’s older daughter would sit on the floor of the lab, playing with the colored caps of sample tubes, while Birx cultured HIV.”

Follow me
Latest posts by Home of Science (see all)
- Advertisement -
Share
Facebook
Twitter
Pinterest
WhatsApp
Previous article‘The Postal Service is a joke’: Trump threatens to block loan if agency doesn’t raise prices
Next articleTrump floats idea of disinfectant for coronavirus ‘by injection inside or almost a cleaning’ — later says he was speaking ‘sarcastically’

Opinion: Lockdowns do bring economic disaster. But don’t rush to the exit

It was bound to happen. As new economic data and forecasts reveal the amount of destruction that coronavirus will leave in its wake, the...
Read more

American Airlines Group Inc said on Friday it expects to halt its daily cash burn by the end of 2020 thanks to cost-cutting measures...
Read more

Thinking About Buying Oil Stocks? Everything You Need to Know Right Now

Image source: Getty Images. To put it plainly, with limited exceptions, right now is not a great time to buy oil stocks. How we got here The past two...
Read more

Use Your Own Website For NetflixI love to make my own videos on the internet and a recent discovery was how easy it...
Read more

Priyank Chopra, The Thinker and the Writer

Priyank Chopra, the author of numerous books and many articles, is a "thinker" - a unique concept for an author. He is the "thinker"...
Read more
Business

Hedge fund manager Mark Yusko is telling investors to brace for a nearly once in a lifetime downturn. The Morgan Creek Capital Management CEO and...
Read more
Science

Amazon has faced no shortage of troubles in 2020, many of them self-inflicted. But here's one thing done right, at least. One of the buildings located...
Read more
Science

Find Out How to Buy Amazon Prime

It has been a few years since Amazon Prime arrived in the retail industry and it still hasn't been completely taken over by Amazon....
Read more
Featured

Fireside Chat With Sean Ferres On How To Land Clients

Sean Ferres is an interesting client generating mentor as he advocates for all parts of individual and expert advancement to assemble the brand. Other...
Read more

What is Priyank Chopra's Philosophy of Mysticism?Priyank Chopra has been one of the most popular and most sought after authors in the field...
Read more
Science

Why Amazon Has Become So Popular?

Ever since Jeff Bezos founded Amazon, he has maintained a strong control over the company. Bezos, himself, is an exceptional innovator. He took a...
Read more
Marketing

Classic bathroom with wood furniture and window side bath tub

How to Create a Business Plan TemplateThere are many companies that sell a business plan template for a fee. Some of these templates...
Read more
Science

March started out as a strong month for the U.S. housing market — but by the second half of the month, the first indications...
Read more
Science

A Novel About KhalidThe first thing I want to talk about with you is what is the title of this novel and how...
Read more
Home of Science
Facebook
Instagram
LinkedIn