In a few days, a tiny semblance of normality is set to return to Spain’s largely empty streets: children.

Over the weekend, Prime Minister Pedro Sánchez announced that as of April 27, parents will be able to take their under-12 offspring for closely supervised and brief trips out of the house — details are pending. Before U.S. President Donald Trump began pushing his ardent supporters to “liberate” their states from stay-at-home orders, Spanish parents had been pleading that the millions of locked-in children be allowed some fresh air.

With more than 200,000 infected and over 20,000 dead, Spain has endured some of the tightest coronavirus restrictions in Europe or beyond with remarkably few complaints. But they’ve been tough on the youngest in this country, stuck at home for six weeks and counting with their increasingly stressed-out parents.

See:Nearly a third of Spain’s 255,000 nurses may be infected with coronavirus, study indicates

To date, one adult at a time can go out for groceries and medicine, with essential and some nonessential workers also allowed out. And you can repeatedly walk your dog. While the debate is growing as to whether Sánchez’s plan to provide kids a modicum of freedom might spark new infections, the mental health of children here is of increasing concern.

She and every parent on the planet. To what degree is this going to be a choice between the physical health of the elderly and the mental health of the young. It’s an impossible choice. : Free children from lockdown, says Spanish mayor https://ift.tt/34KD2nt

In Spain, children are not allowed to leave home for any reason under strict coronavirus rules.

A widely circulating El País report on hard-hit Madrid families, some sharing a tiny bedroom day in and day out, drives home the sacrifices being made. Our 80-square-meter apartment with two small balconies deserves few complaints by those standards, though I quietly covet the houses with backyards in the wealthy Pozuelo district or even my neighbor’s attic apartment with its spacious patio.

But, with an 11-year-old literally bouncing off the walls, when he’s not sleeping in or overdosing on electronics, I’m counting the days to any measure of liberation for the nation’s under-12s. After two hours of whatever schoolwork he can endure, there’s still a ton of day to fill. By dinner time we are all short-tempered — and tolerance has clearly left the building.

Sánchez’s measures don’t address the frustration of adolescents here, as accustomed as they are to roaming the streets freely. My 16-year-old is permitted to go to the grocery store by herself, but she is now on a tight lead. That said, she’s toughened up, and says her stateside peers have little room to complain as they can still walk out their front doors in most cases.

It does feel miraculous even to have arrived at this point, where we can talk about loosening restrictions. The death toll dropped to its lowest level since the crisis began on Monday, with fewer than 400 added to the body count, though weekend numbers can often deceive as regions aren’t fully staffed to perform tallies. The question on everyone’s mind is whether too much freedom, too soon, could return to haunt us.

The Spanish government made big mistakes in early March — no restriction, perhaps tragically, was placed on travel by Atlético Madrid fans to Liverpool for a football match, and thousands marched for International Women’s Day and gathered at a political rally in Madrid. The government continues to pay one of the highest prices in Europe for its delayed response, and the economy is in for historic suffering.

That’s one reason images of armed U.S. protests against stay-at-home measures have taken some by surprise here. It’s disconcerting to see calls for liberty from state-mandated confinement, observed one Spaniard’s tweet, but few demands for health care for all or public help for the most vulnerable.

Two nurses, who have witnessed first hand the toll Covid is taking in Colorado, stood up and peacefully counter protested. Here is how they were treated. I had join them. 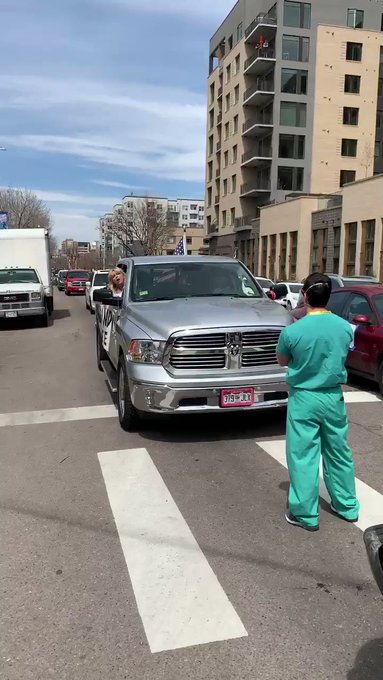 No one here is happy being confined, either, but if there are successes being won through these strict measures, then Spain, like China before it, may have served as an example, at least for those cities where individuals have shown a higher tolerance for being asked to stay inside. New York City, for one, is now seeing some success in bending its curve.

And now, if everything we’ve always taken for granted is to be handed back to us only one tiny piece at a time, that’s good enough. Because it has to be.

Follow me
Latest posts by Home of Science (see all)
- Advertisement -
Share
Facebook
Twitter
Pinterest
WhatsApp
Previous articleA million Brits are set to have their wages paid by the state as firms rush to join new compensation scheme
Next article‘No paranoid rambling, no blame-shifting’ — New Zealand PM hailed as world’s ‘most effective leader’

Running a Business – The Right Way to Set Your Work Schedule

Running a Business - The Right Way to Set Your Work ScheduleMany people use their business as a source of income. Because of...
Read more

Do You Want Netflix?

"Netflix" is the name of a service that allows subscribers to stream films and television programs on their computers or mobiles. It is by...
Read more

Why One Must Get Custom Business Card Design Services?Business cards are little cards containing business details about an individual or a business. They...
Read more

In January, hospitals in England treated nearly a third of all Covid patients since the pandemic began.image copyrightGetty ImagesNearly 225,000 people in England have...
Read more
Business

An investigation is launched after the child was found by a passer-by in a nature reserve.image copyrightSnapperSKThe body of a baby boy has been...
Read more

How Will the Super Bowl Change With the New Point System?The Super Bowl has become the largest and most watched annual sports event...
Read more
Science

What is Mesothelioma?Symptoms and signs of mesothelioma can vary significantly based on where on the body the cancer is. Pleural mesothelioma, that affects...
Read more
Science

Why You Need A Mesothelioma Attorney

Why You Need A Mesothelioma AttorneyIf you or a loved one has been diagnosed with mesothelioma, it is important to get the assistance...
Read more

The US is the first country in the world to approve the Johnson & Johnson vaccine.image copyrightGetty ImagesUS regulators have formally approved the single-shot...
Read more
Science

Discover the Benefits of Amazon Prime

If you have yet to discover the benefits of becoming a member of Amazon Prime, then this is the perfect time for you to...
Read more
Business

Businesses are concerned they might not be able to afford the compulsory pay rise this year.image copyrightPhoenix Arts Club About two million of the...
Read more
Business