Keeping Up With The Chemophobia

The latest episode of Keeping Up With the Kardashians chronicles Kourtney Kardashian’s day advocating for cosmetic reform on Capitol Hill. The reality TV star-turned lobbyist teamed up with Environmental Working Group (EWG) to convince lawmakers that cosmetics are unsafe, and to pass sweeping legislation to change how the U.S. Food and Drug Administration (FDA) handles cosmetics.

Kardashian thoroughly prepared her pitch, purportedly asking her friend, “The House of Representatives. Is that what it’s called?” over lunch at a local steakhouse. 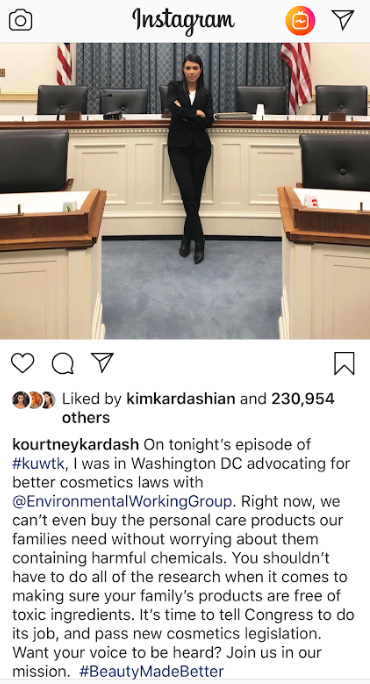 Let us help you out, Kourt.

Currently, the Food, Drug and Cosmetic Act requires all cosmetics be substantiated for safety before reaching the market, prohibits cosmetic from containing banned ingredients, and requires labeling and packaging to be compliant with U.S. regulations. Put simply, the law already prevents cosmetics companies from selling dangerous products in the U.S.

However, that won’t stop EWG from using any opportunity to raise alarm (and funds). While teaming up with a Kardashian rarely boosts your scientific credibility, EWG didn’t have a lot to start with. A survey of almost 1,000 members of the Society of Toxicology indicates that the vast majority of professional toxicologists believe advocacy groups, including EWG, overstate the risk of chemicals. The majority of these scientists also believe that cosmetics are safe. Health and safety policy is no place for exaggeration and manipulation.

If changes to the way our federal government evaluates the safety of cosmetic ingredients originate anywhere, it should be from the research and experience of relevant scientific professionals. Not from celebrities bent on building a brand, and certainly not from an organization with a history of putting fear above scientific understanding.

Are Oprah Winfrey and Olivia Ross Making a Lot of Money From the "Secret" Video?On the eve of her birthday, Oprah's in the...
Read more

Cumberland Infirmary patient ‘dropped’ from operating table dies within weekson May 28, 2021 at 5:26 am

A hospital confirms it is investigating "an incident involving a patient in one of our theatres".image copyrightFamily photographA woman has died after being "dropped"...
Read more

The Best Way to Stream Netflix

Streaming Netflix can be a hassle sometimes, especially if you are always running low on bandwidth. How do you find the best way to...
Read more

Meet The Reasons: A Pennsylvania Band Focused on EDM and Hip Hop Managed by Bob Cutarella

India fast bowler Jasprit Bumrah will miss the fourth Test against England next week for personal reasons.The 27-year-old, who is eighth in the bowling...
Read more

Queues of tankers have formed off China’s busiest oil ports as the vessels wait to offload crude for refineries that are quickly ramping up...
Read more
Business

The plan renews a promise to raise $100bn a year, but environmentalists say it lacks detail.image copyrightReutersThe G7 nations have agreed to step up...
Read more

There is "strong evidence" services for female patients in England need improving, ministers say.image copyrightGetty ImagesWomen and girls in England are being asked to...
Read more
Business

Liverpool manager Jurgen Klopp says Manchester City would not have won the Premier League this season if they had to deal with his side's...
Read more
Science

How Artists Design Their Own Unique Designs for Business Cards

Business cards have been around for a long time. What is new about them is the modern aspect to their design. The old design...
Read more