A whopping 6.6 million people filed an unemployment claim last week, shattering the previous high of 695,000 in October 1982 and the Great Recession peak of 665,000, the Labor Department reported on Thursday. That brings the two-week total to about 10 million due to the coronavirus-induced economic shutdown. As tough as it may be to lose a job, though, many people are now finding out that they’re not getting the kind severance package they thought they would.

There have been reports of restaurant staff getting severance based on their base wage rather than their total salary with tips included, some are getting fewer weeks than they assumed they were entitled to, while others are getting no severance at all.

With the Federal Reserve estimating that 47 million people could lose their jobs before the COVID-19 crisis ends, a lot more people will be hoping their employers pay up in the proper way. So what can you do to ensure you’re getting the payments you deserve? We explain.

Understand the different kind of layoffs

There are a number of ways that companies can categorize a layoff, and the Society for Human Resources Management has a good guide online as to the differences.

Essentially, whether you’re entitled to severance or not will depend on how you’ve been laid off. Those who are temporarily furloughed will not receive any severance, says LaCinda Glover, a senior principal at human resources consulting firm Mercer. Their jobs have, essentially, been freezed. “You’re technically still an employee of your organization, and they can call you back in,” she says.

If you are temporarily laid off, you may still be entitled to your existing benefits, including medical, dental, vision and life insurance coverage. You can also file for unemployment benefits and even look for another job.

While there is no set time frame on how long the furlough is in place, if the COVID-19 crisis continues, at some point it will get too expensive for companies to continue those benefits and you could end up being permanently let go. “Temporary leave is meant to be short term,” says Glover. “If it goes beyond six months, how much longer can they string the employment along?”

Pandemic Unemployment Assistance (PUA) provides payment to workers not traditionally eligible for
unemployment benefits (self-employed, independent contractors, workers with limited work history & others) who are unable to work as a direct result of the #COVID19 emergency. 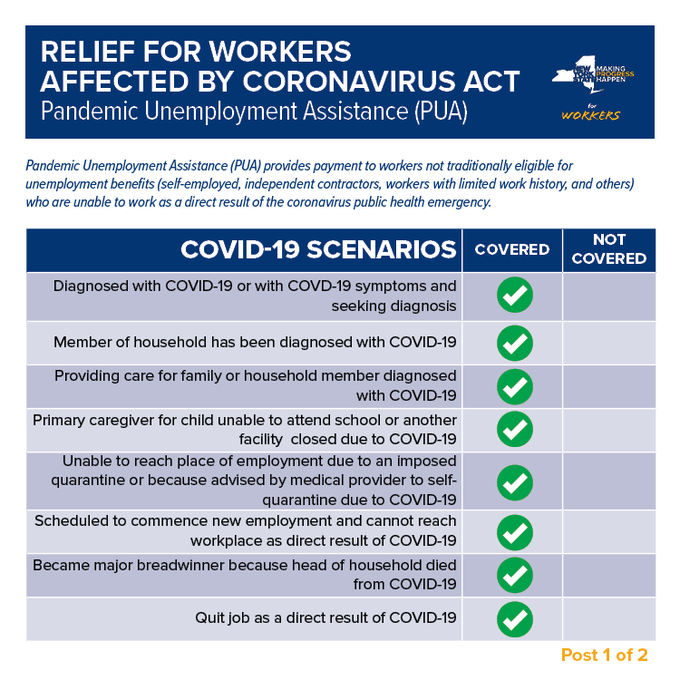 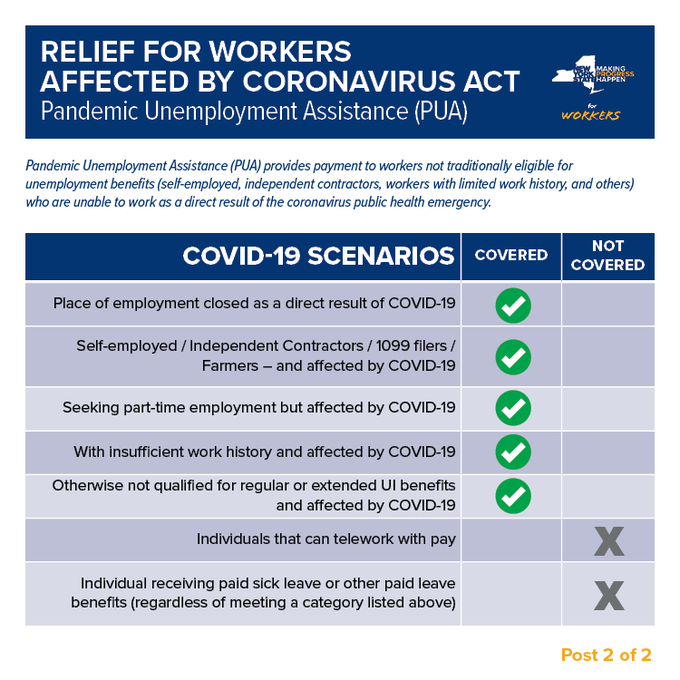 Severance is not mandatory

If the temporary work stoppage becomes a permanent one, or if you were fully let go from the start, then you may be able to get severance. However, it’s important to know that in the U.S., severance is not mandatory and many companies do not pay it.

For the companies that do, it’s typical to get one to two weeks of pay for each year of employment. So if you worked for 10 years, you might receive 10 weeks of severance.

Typically, companies pay something in exchange for you not making a wrongful-termination claim against the company. However, in this environment, where people are getting laid off left and right, wrongful terminations are not nearly as big of a concern for businesses. That could make it tough to collect money that you think should be coming your way.

Do you have an employment contract?

Severance payments are usually outlined in an employment contract, along with other things, like whether you get paid for unused vacation days if you leave a company before your contract is up, how much notice a company must give you before they terminate a contract and more.

Unfortunately, the vast majority of Americans do not have an employment contract. In that case, they may not even know if they’re entitled to severance at all, says Farnaz Kashefi, a California attorney who specializes in labor and employment law.

In more normal times, if you knew a colleague received two weeks per year of severance, then you could expect to get the same. Now, though, with so many people losing jobs, precedent doesn’t matter, she says. If no one is getting severance, then you likely won’t get it either.

If you do have an employment contract, it might say that you’re entitled to two weeks for every year of working, and in that case you should expect to receive it.

However, if your company is going under, then those checks may not arrive. “If they can’t keep their doors open, then it’s not a legal issue, it’s an economic one,” she says. “They can’t afford to pay severance, because their business is going under.”

What else can you do?

Whether you’ve received severance or not, you should apply for unemployment insurance and apply for jobs. Companies in in-demand sectors, like grocery, health care and IT, are hiring, and you can still usually take that severance check and earn money elsewhere, says Glover.

Kashefi, the attorney, does say that a lot of employers are trying to find other ways of keeping staff around — in some cases, there are rules prohibiting companies from laying off more than 50 people without 60 days’ notice — such as by reducing hours and implementing furloughs.

But while severance may be hard to come by in some instances, Glover thinks companies will try their best to help people with their transition to unemployment. “I know a lot of organizations who say it’s breaking their heart to let employees go and if they can afford to pay them a benefit, they will. We will see organizations trying to do the right thing.”

Follow me
Latest posts by Home of Science (see all)
- Advertisement -
Share
Facebook
Twitter
Pinterest
WhatsApp
Previous articleHow to Improve Your Letter Formats
Next articleNBA players urge colleagues to get financially educated during work stoppage: ‘Don’t look at this as a timeout,’ Chris Paul says

Even with all the hype surrounding online marketing and advertising, very few people actually understand the techniques that work. Perhaps because it is so...
Read more
Business

Super Bowl 2020: What Does the NFC West Has to Do to Win the Super Bowl?

On Sunday, January 17th, the St. Louis Rams will have to face the Atlanta Falcons in Super Bowl 2020. This will be the first...
Read more

It's About Time That Something Was Done About ThisIf you are unfamiliar with Super Bowl's, this is an annual event that takes place...
Read more
Business

Northern Ireland abortion law changes proposed by the DUPon February 16, 2021 at 9:13 am

Method for thawing surfaces in seconds is developed by scientists

A much more efficient method, at least according to the press release, to remove ice from the surface, was developed by a group of...
Read more

Priyank Chopra has written one of the best books on the subject of quantum physics. Quantum physics is an area of science that cannot...
Read more
Science

Super Bowl 2020 EventsIf there is one thing that every NFL fan is going to miss from the Super Bowl, it will be...
Read more

The major cause of mesothelioma remains exposure to asbestos. Since this was discovered, there have been a lot of treatment options developed to handle...
Read more
Business

Kim Kardashian joins those lamenting the news about the second series of the popular Netflix show.image copyrightGetty ImagesHe is one of the standout stars...
Read more
Home of Science
Facebook
Instagram
LinkedIn