Russia and Saudi Arabia have called off their brutal price war and are now pushing dozens of major crude producers toward a deal that would slash production and help stabilize a market that’s been rocked by the coronavirus pandemic.

A marathon video conference between OPEC members and other major energy powers on Thursday ended with a tentative deal to reduce production by 10 million barrels per day in May and June, the deepest cut ever agreed by the world’s oil producers.
But there was a snag: Mexico declined to support the agreement, and meeting participants acknowledged in a statement that final agreement is conditional on the country’s consent. Attention has now turned to another round of talks between the Group of 20, which includes Mexico.
OPEC Secretary General Mohammed Barkindo on Friday urged G20 countries to join in production cuts, saying every oil producer has a responsibility to “broaden this operation.”
“Every producer, many of whom are developing nations, have been impacted and no one is immune. It is forcing us to assess and reassess what the consequences are on an almost daily basis,” Barkindo said, according to a transcript of his remarks.
close dialog
Oil producers are desperately seeking to boost prices after Saudi Arabia and Russia abandoned years of production cuts in early March, launching a price war by flooding the market with crude. A massive drop in demand for energy caused by the coronavirus pandemic pushed prices even lower.
On Friday, there were signs the group was moving toward consensus.
Mexican President Andrés Manuel López Obrador told reporters that he had discussed the issue with US President Donald Trump, and agreed to cut production by 100,000 barrels per day, which is far less than the 400,000 barrels per day other producers had sought on Thursday.
According to López Obrador, Trump offered during the phone call to cut US production by 250,000 barrels per day to compensate for Mexico. Trump confirmed Friday that the US agreed to a cut in order to pick up some of the slack after he spoke with López Obrador.
Even if producers cut output by 10 million barrels per day, the decline in production would amount to only about 10% of the world’s normal supply of oil, far below the estimates for how much demand for oil has collapsed in the wake of the coronavirus crisis. And it is unlikely to stem the massive plunge in oil prices in recent months.

Thursday’s meeting began with Barkindo sounding the alarm about both oil prices and demand.
He told attendees that projections call for demand of nearly 12 million fewer barrels per day in the current quarter. “These are staggering numbers! Unprecedented in modern times,” he said.
At that rate, “Given the current unprecedented supply and demand imbalance there could be a colossal excess volume of 14.7 million barrels a day in the second quarter of 2020,” he said.
Even those dire forecasts may be too optimistic, as they could underestimate how much demand has fallen with harsh restrictions on travel, work and public life now in place in much of the world because of the pandemic.
Tom Kloza, the chief oil analyst for the Oil Price Information Service, said he believes demand is down as much as 20 million barrels a day. “This cut is woefully inadequate to stabilize prices into at least the summer,” he said.
The tentative agreement negotiated Thursday would see the output reduced to 8 million barrels a day from July to December followed by a 6 million barrels a day reduction from January 2021 to April 2022. ​
Iran, Libya and Venezuela would be exempted from the output cuts due to sanctions or lost production. 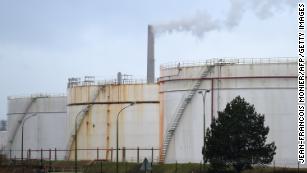 The world could soon run out of space to store oil. That may plunge prices below zero
Oil futures had started Thursday higher on reports that there would be an agreement to cut up to 15 million barrels a day. As the day wore on, though, doubts emerged that the cut would be that large and prices closed slightly lower.

Hopes for a deal

Thursday’s emergency meeting, which was called by Saudi Arabia, followed pressure by Trump, who last week called on Saudi Arabia and Russia to deliver big production cuts.
Trump said he spoke with Russian President Vladimir Putin and King Salman of Saudi Arabia Thursday to discuss oil production.
Dozens of US oil companies are facing bankruptcy due to the collapse in oil prices and Trump said that he anticipates worldwide layoffs in the oil industry.
“The numbers are so low that there will be layoffs all over the world, there will be certainly layoffs in this country and we don’t want that to happen,” he said.
Trump said he hopes there will be a deal worked out to cut oil production. “We’ll see what happens but as you know OPEC met today and I would say they are getting close to a deal,” said Trump.

Swimmer Levana Hanson had her sights on a medal – that all changed when she was told one stump too long for her classification.Swimmer...
Read more

Everton reinforce their European credentials with a hard-earned win away to Champions League hopefuls West Ham.After being fourth in the Premier League at the...
Read more

Two Weta Digital experts explain how they updated the characters' look.When DC Films’ Justice League was in post-production back in 2017, its director, Zack...
Read more
Business

Antiviral medicines could be another tool to fight an anticipated third wave, Boris Johnson says.A search for simple treatments for Covid that can be...
Read more
Business

Although cases of mesothelioma are very rare, they are only as rare as the person who is exposed to the asbestos. However, it is...
Read more
Science

Milan Ackerman says, “The music industry enters 2020 on a wave of growth – and optimism.”

Milan Ackerman says, “The music industry enters 2020 on a wave of growth – and optimism.” Barring a major surprise, 2019 will have been the...
Read more

In the busiest earnings week of the season, Thursday is the biggest act. Two trillion-dollar companies — Apple Inc. AAPL, +1.01% and Amazon.com Inc. AMZN, +1.86% — will follow the successes...
Read more
Business

This article will show you how to get a free Oprah download. Please note that this will require that you find out information about...
Read more

Trump’s Time at the Virus Podium May Get Slashed

A day after a virus press briefing in which President Trump set off a firestorm with his supposedly sarcastic disinfectant comments, buzz began that we...
Read more
Business

An interview with the ex-president was posted by his daughter-in-law, Lara Trump, on Facebook.image copyrightEPAFacebook has removed a video of former US President Donald...
Read more
Home of Science
Facebook
Instagram
LinkedIn