Northern Ireland end a memorable year on a high with a 9-0 victory over North Macedonia in World Cup qualifying.
Read more
Business

It may just be the key to the Golden Arches.

For anyone interested in fast-food stocks, “you really have to have the stomach to be able to withstand major volatility, and I don’t think that volatility is over just yet,” O’Hara said. “I brought a chart of Wendy’s because I think that’s a good example of what we can expect going forward.” 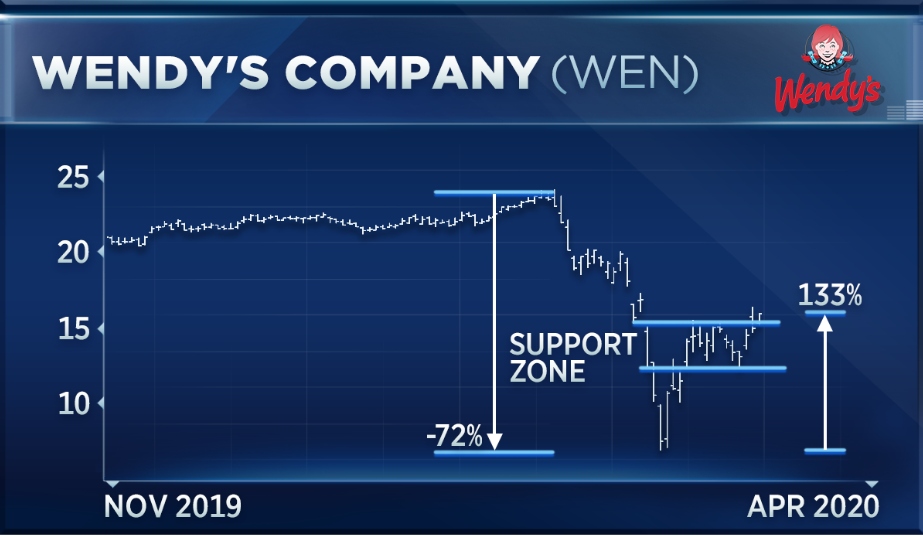 “If you look at Wendy’s, the stock declined over 70% from its February highs to its March lows,” he said. “As news started to slowly turn positive, it recovered, and that recovery was meaningful. It was up 130%.”

That recovery brought Wendy’s out of a trading range from $12.50 to $15.50, which has now become an area of support for the stock, O’Hara said.

John Petrides, portfolio manager in the wealth division of Tocqueville Asset Management, said in the same interview that while it was a “good sign” that McDonald’s shares held up after such a grim announcement, it may have been the first of many to come.

“With earning season ramping up next week, I do think this is what we’re going to see from a lot of companies, and that is, you know, massive downward revision, downward numbers on top-line growth, and companies husbanding cash,” Petrides said.

“You see McDonald’s cut its capex and removing guidance,” he said, referring to the company’s $1 billion cut in capital expenditures. “If you’re a CFO of a company, with the environment that we’re in, why would you even stick your neck out to try to figure out what we’re going to be like at the end of the year?”

When it came to Wendy’s, Petrides suggested opting for other names.

“Wendy’s has leverage on the balance sheet [and] clearly doesn’t have the size and scale that McDonald’s has,” he said. “When you look at the overall market, there’s enough high-quality companies that are on sale. I don’t think you need to go bottom-fishing in a Wendy’s.”

Naomi Osaka says she felt "ungrateful" at points in the last year for being unable to appreciate her success.
Read more

The word Oprah means a lady in an elite position. But what does that mean to a guy? Can he be one too? ...
Read more

Most students back an assessment for students to show they "fully understand" consent, says survey.image copyrightGetty ImagesA majority of UK students think there should...
Read more

Watch the best moments from Sunday's action in the men's and women's Hundred as Birmingham Phoenix took on Trent Rockets at Edgbaston and London...
Read more

Social distancing, the most pivotal and controversial planks of anti-coronavirus health policy, has kept millions around the world locked at home and away from...
Read more
Business

Many unemployed people may not be aware of the coronavirus-related financial assistance that is available to them. A whopping 80% of unemployed Americans say they...
Read more

The homemade special effects livening up lockdownon February 21, 2021 at 12:01 am

Jobs recovery continues despite end of furloughon November 16, 2021 at 7:31 am

The number of workers on payrolls rose in October despite the end of the job support scheme.Image source, Getty ImagesThere were 160,000 more workers...
Read more
Science

Most people lust over the idea of social media fame and will go to extreme lengths to try and clai that they have a...
Read more

Former England captain and BBC Sport columnist Alan Shearer says there are reasons for the Three Lions to be optimistic about making it all...
Read more
Business

Covid in Scotland: Call to cancel operations to reduce NHS pressureon July 8, 2021 at 9:52 am

A senior public health official said "difficult decisions" must be made amid staff absences and rising admissions.Another possible solution would be to reassess whether...
Read more
Science

Sabre Corporation Is A Recognized Company In Charlotte, NC

The Sabre Corporation is an innovative enterprise based in Charlotte, North Carolina. A number of facilities are under the ownership of this company. They...
Read more

Andy Murray says he "lost respect" for third seed Stefanos Tsitsipas during a feisty US Open match where the Briton accused his opponent of...
Read more
Entrepreneurs

In the summer of 2021, the world will learn about the new blockchain technology that entrepreneur Hitesh (Neel) Patel and his company have created....
Read more
Business

The number could rise to 300,00 but most abusers are thought to be too old to prosecute under French law.
Read more
Home of Science
Facebook
Instagram
LinkedIn